Inferno rages for hours at house in Cane Garden 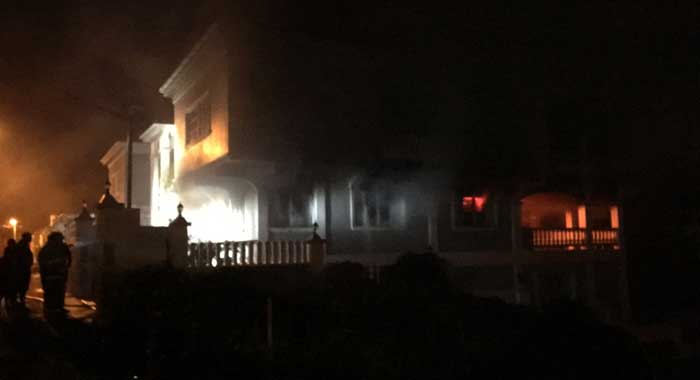 The fire has been blazing for more than six hours at the house in Cane Garden. (iWN photo)

Reinforcement had begun to arrive just before midnight Monday for energy-drained fire fighters who had been struggling to extinguish a fire at a multi-storey house in Cane Garden — one mile from the Fire Department — almost seven hours after the alarm was raised.

National Security officials had cleared the release of a fire tender from Argyle International Airport – after it closed — to help in the efforts and acting Commissioner of Police Colin John had visited the scene to help to co-ordinate the response.

The fire was on the penultimate floor of what is said to be a five-storey house.

iWitness News understands that the floor on which the fire broke out was being used to store items for a business in Kingstown.

Anxious residents, many of them members of the nation’s Middle Eastern and the business community, assisted the efforts to extinguish the blaze.

Some helped to direct the water into the building as the fire-fighting effort continued on two sides of the house, while other assisted by pouring drinking water for fire fighters.

The blaze again exposed the deplorable state of the nation’s firefighting services, although there have been some improvements recently, specifically the acquisition of appropriate clothing and breathing apparatus.

However, these improvements have not included the acquisition of any new fire tenders although the inadequacy of the two or so stationed in Kingstown is exposed every time there is a major fire.

During the 90 minutes or so that iWitness News spent at the scene, a small fire tender repeatedly left to go to a fire hydrant elsewhere to refill its tanks.

When it returned, it took just 3.5 minutes for the fire tenders to pump the water it contained, using a hose that seemed to be about 1.5 inches in diameter.

It then took about 10 minutes for the fire hydrant to refill.

A second, and larger, fire tender was connected to a fire hydrant in the area and was being used to pump water continuously into the house.

Among the persons looking on at the scene was Ernesto Cooke, a media personality who owns and operates the news website News784 and is a co-host of the morning show on Star FM, which is owned by the ruling Unity Labour Party.

Cooke, a Cane Garden resident, told iWitness News: “The fire actually started around 5:30 this afternoon and the firemen got here around 6 o’clock and it has been a bit chaotic since they got here because they were frantically looking for fire hydrants and asking for hoses to borrow as well from neighbours because they couldn’t find, apparently, the connections for what they brought.

“And, oxygen ran out, an axe broke; so, a number of things. So, they are trying their best to get it under control. I am not sure when it would happen but–”

As iWitness News arrived at the scene around 9 p.m., a firefighter who happened to have been sitting in a dark area at the side of the road a little distance from the blaze was overheard commenting to himself about how tired he was.

Minister of Health, Sen. Luke Browne, who has lost twice in his bids to represent, in Parliament, East Kingstown, within which Cane Garden is located, arrived at the scene sometime around 10 p.m.

He seemed to have gotten annoyed when lawyer Grant Connell, a resident of Cane Garden, spoke of the deficiency of the fire service.

And by the time iWitness News left the scene, another police officer from another department who had been dispatched to assist the non-fire-fighting aspect of policing at the scene, had his head leaned against his hands on a wall.

When asked about the gesture, the officer commented about being extremely tired after the long hours at work that day.

One resident of the community who had earlier assisted in the fire-fighting effort, told iWitness News that when fire fighters arrived they had to ask where the fire hydrants were located.

The resident said that when they checked, three of four hydrants located relatively close by were not working.

In a comment sent to iWitness News, another resident said:

“This fire has been blazing in Cane Garden since minutes after 5. It’s now minutes to 9 and [the] fire [is] still blazing. Small fire truck had to leave 5 times to get water, the big truck is hooked up on a hydrant some distance away but everywhere the hoses join, the water is leaking.

“They have no proper lighting, neighbours have to bring floodlights to help. The fire axe broke […]. All the oxygen tanks to help them breathe were useless after 15 minutes.”

The resident said that the firemen were outside the house “standing up like headless chickens” while residents were using the fire fighters’ hoses to douse the fire.

The resident told iWitness News that neighbours made the decision to move their LPG cylinders to a safe distance away from the fire although the fire-fighters had told them that the cylinders would not explode as a result of the flames.

“This has to be a Mickey Mouse club. No planning no sense of direction; seemingly totally useless. And both hoses are concentrated at the front when one could be at the back where the fire is seemingly strongest,” the resident said.