NDP ‘crazy about creating an environment for jobs’ 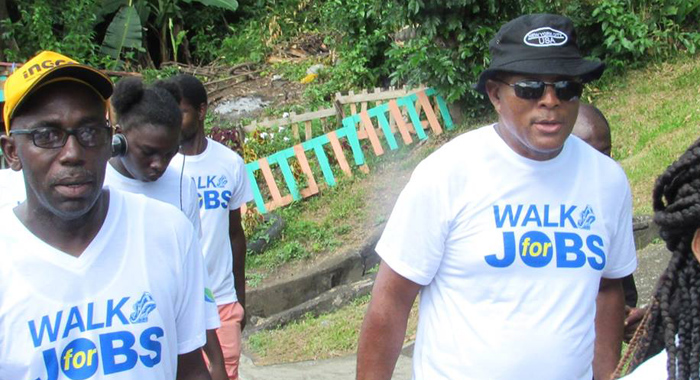 MP Nigel “Nature” Stephenson, left, and other persons in the walk on Saturday. (Photo: NDP)

As Opposition Leader Godwin Friday led supporters of his party on a walk from Fitz Hughes to Kingstown last Saturday, some observers accused them of being “crazy”.

And, Member of Parliament for South Leeward, Nigel “Nature” Stephenson, an NDP member who took part in the walk, agreed with them.

“My response to that is that we are crazy about creating an environment for jobs for our young people,” Stephenson told iWitness News in Pembroke, after the team had travelled some 20 of the 25-mile journey.

“Because what we really want to find in St. Vincent and the Grenadines is a population that is working.”

The NDP organised the event to highlight the issues of joblessness and crime in St. Vincent and the Grenadines.

“We are fed up of having too many gangs and too many blocks where there are idle hands. We want to take those idle hands and make them active,” said the former teacher who is his party’s spokesperson on youth matters.

In Parliament on Thursday, Stephenson asked about the hundreds of people leaving school and compounding the unemployment situation.

He said that when he asked the question, he was bearing in mind the government statistic that 46 per cent of the nation’s youth are unemployed.

Last year, after the figures became public, the Unity Labour Party administration said it erred when it told the International Monetary Fund that 46 per cent of the nation’s youth were unemployed.

“And with all these hundreds and even thousands of people leaving school, colleges, universities, the unemployment situation will be compounded and they (government) have not acknowledged at all that this is a problem. And they do not show that they have the capacity to provide jobs for our people.

“But the question is, are we gonna have a situation where we have an educated, sophisticated, criminal society?

Stephenson said that inactivity could be an incubator for crime and criminal activity.

“… so that is why we are walking to heighten the awareness so that people can know that the New Democratic Party is serious about providing job for our young people.

“And, as the person who is shadowing youth, I want to give our people the assurance that we are going to do everything we possibly can to ensure that hope is restored and when we get into the government, we are going to hit the ground running and create jobs for those persons who the government have neglected so far…

“… and that is why, precisely, we are walking today, to draw attention to these two very critical issues,” he said.

The walk is an initiative of the NDP leader, who will, this Saturday, lead a similar walk from Georgetown to Kingstown, also in an effort to highlight unemployment and crime.

4 replies on “NDP ‘crazy about creating an environment for jobs’”