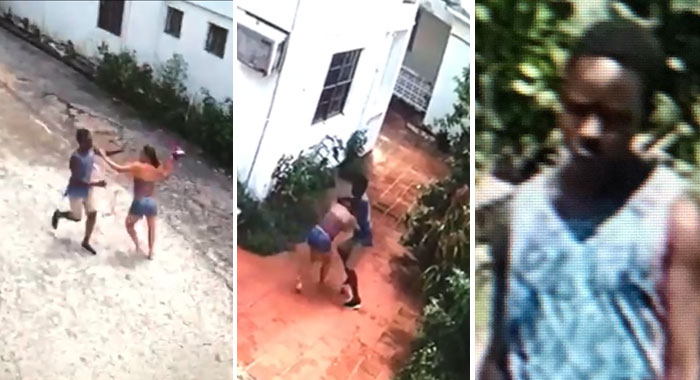 These first two scene, taken from video, show the attack on the woman. At right is the attacker, later identified as Terano “Tone Boss” Samuel of Troumaca.

Police have arrested a Troumaca man in connection with the brazen daytime assault of a woman at Indian Bay on Tuesday.

The assault, which occurred around 1:39 p.m., was caught on surveillance footage, resulting in the arrest, on Wednesday, of an 18-year-old man for the North Leeward community, located more than 20 miles from the scene of the attack.

The Police Public Relations Department, in a statement on Wednesday, said that consequent upon a report made to the Calliaqua Police Station on Tuesday by a 32-year-old female of Indian Bay about an assault in that community, the Police launched an investigation into the matter.

During the investigations, the police acquired footage from a video that was being circulated on Facebook showing a female being attacked by a male assailant in the said area.

“The general public is hereby informed that Mr. Terrano Samuel, 18 years old, of Troumaca is in custody assisting the police with their investigation into this matter,” the statement said.

“The commissioner of Police Mr. Colin John will like to thank the general public for providing valuable information that led to the arrest of Mr. Samuel and the officers attached to the Rapid Response Unit and those stationed at the Calliaqua and Chateaubelair Police stations for their prompt response in effecting the arrest of Mr. Samuel,” the statement concluded.

The video circulated on social media shows the man loitering near a building near the beach.

As the woman approached the building from the direction of the beach, the man runs up to her and attempts to grab her.

The woman, realising that she was being attacked, fights back, but the man manages to drag her to another section of the building, out of view of the CCTV camera that recorded the incident.

A few seconds later, the man walking back into view of the camera with the woman a little behind him.

The woman, however, goes back out of view as she went back in the direction in which the man had dragged her.

The video ends at this point.

The assault occurred in the nation’s tourism belt, in a district where several hotels and restaurants are located.

The tourism strip has been the scene of several crimes over the last few weeks, including the robbery, at gunpoint, on Aug. 5 of two US-based Vincentian women who were in St. Vincent on vacation. The women were robbed along the boardwalk in Villa, as they made their way back to their hotel shortly before 10 p.m., after having dinner at a nearby restaurant.

In addition that crime, four women were abducted at gunpoint in the Villa area on Aug. 17.

Police have made arrests and have brought charges in connection to those crimes also.

All of the persons charged in connection with the crimes are teenaged males.

See below the video of Tuesday’s attack: