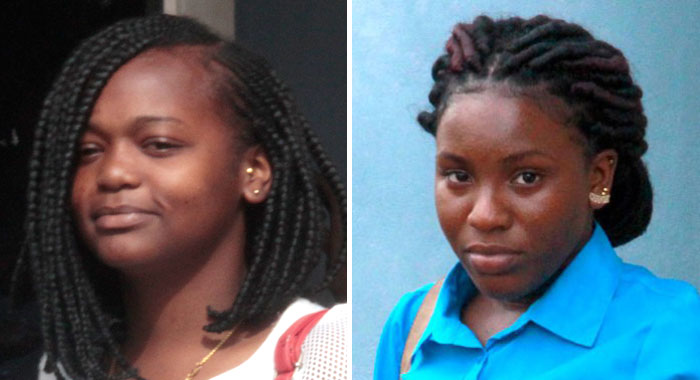 Sakaina John, left, the virtual complainant, and Chantae James, who has been convicted of wounding. (iWN photos)

The woman accused of stabbing a female Community College student in Kingstown on March 28 will know her fate  on Friday.

Chantae James, of Old Montrose, took the stand in her own defence on Sept. 3, the final day of her trial at the Kingstown Magistrate’s Court, before Senior Magistrate Rickie Burnett.

She is charged that on March 28, 2018, at Paul’s Avenue, Kingstown, she wounded Sakaina John, of Lowmans Leeward.

A photo circulating on social media shows the lower half of John’s face with her lower lip slit perpendicular to her mouth and a cut to the right side of her face.

The prosecution’s case painted a picture of an online fight over a young man escalating offline.

According to the evidence, the person at the centre of the fight is one Javid Lewis, with whom James had had a relationship.

Lewis was John’s boyfriend at the time of the March 28 incident.

In her defence, James told the court the knife she had during the March 28 incident belonged to her father, a chef, and that she was taking it to him.

She further said she took the knife from her father’s knapsack during the confrontation with John because she feared that she was in danger when the complainant “approached” her.

James took the stand minutes after the investigating officer, Detective Constable Sheffique Joseph, read the caution statement in which she said she took out the weapon from the bag before the fight between she and James began.

She told the court that she is unemployed but was taking classes with the intention of enrolling at the Community College.

The court heard that James and John got to knew each other after James sent a friend request to John on the social networking site, Instagram.

Sometime after their online acquaintance, James posted a screenshot of a conversation between her and her ex-boyfriend, who was John’s boyfriend at the time of the stabbing incident.

James said that the following day, John tagged her in comments under the screenshot.

“Me p**ey [vagina] just lef fuh wash and go down in the grave and how she doh leave nothing unsaid,” James quoted John’s comment as saying.

She said that while she had known John from the post, they had had no interaction before that.

James, however, admitted that she had spoken to John in person when she (James) went to the Community College to help a friend sell items.

She said that when she attempted to speak to John at the college, John ignored her and walked away.

However, when John had walked a distance, she told James “to f**k off and how me p*key watery,” James testified.

James told the court an argument ensued and they were pointing their hand in each other’s face, but the confrontation ended when she caught a van and left.

She said the next time she saw John was on the day of the incident, which took place sometime after noon.

James said she was standing outside Caribbean Reference Lab, located across the street from Bishop’s College in Paul’s Avenue.

The defendant told the court that she was waiting for a van outside the lab when she saw John walking in her direction on the same side of the street.

She said John approached her and told her to tell her what she (James) was saying to John at the college.

James said that accompanying her at the time was her 3-year-old cousin whom she had picked up from pre-school. She said that, on that day, she had also gone to her father’s workplace to pick up a bag.

She said that John approached her.

“She say tell she what I telling she now and point her hand in my face. I said because you have your friend and I by myself, you come to fight me,” James said.

At the time, John was with her schoolmate and friend, Jézell Prescott, who in her testimony, told the court that she and John were on their way to John’s mother’s workplace in Stoney Ground.

James said that after an exchange of words with John, the complainant pushed her against a wall, even as she was still holding her cousin.

The defendant said she then put down the child and James accosted her again, “chucking” her.

James said that during all this, John did not say anything.

“I end up and go in the bag. Then I took out the knife out the bag just to scare her away,” James said.

She said she was holding the knife in such a way that the blade was pointed away from James.

“Then she rush in to box me,” James said and further told the court that she (James) did not do anything at that point.

“Then I look now and see she end up and get the cut and I stepped back,” James told the court, adding that John had received a cut to the lips.

She said John rushed in again “to start to fight and that is when we begin to fight up with each other”.

James said she still had the knife at the time, “because we were fighting up with the knife, like we been tussling up to take away the knife from each other.

She said that someone came and separated them and the defendant wrestled the knife from her and dropped it to the ground.

James said that she got a cut to her right hand and a scratch to the forehead.

She said that she did not know if John had received any other injuries than the slit lips.

James told the court that police then arrested her and left her young cousin at the scene of the incident.

During cross examination by prosecutor Police Constable Corlene Samuel, James told the court she lied in her statement to police when she said she took out the knife when she saw James.

She said she told the lie “out of fright”.

The defendant said she also lied when she told the police that she had taken the knife out of her bag, rather than her father’s bag.

She, however, said she did not lie when she said that the defendant had come up in her face — had “approached” rather than approach the area where she was standing since John was going in that direction.

“So you told a lie today or you couldn’t remember the lie you tell?” Samuel asked the defendant.

James told the prosecutor she does not agree that she overreacted even if she had feared that John would harm her.

When the prosecutor asked James if she could have fought off John with her hands, if that was necessary, the defendant said yes.

She, however, said she took out the knife because she wanted to scare James away.

James is being represented by counsel Carlos James.

4 replies on “Woman charged with stabbing student to know fate”