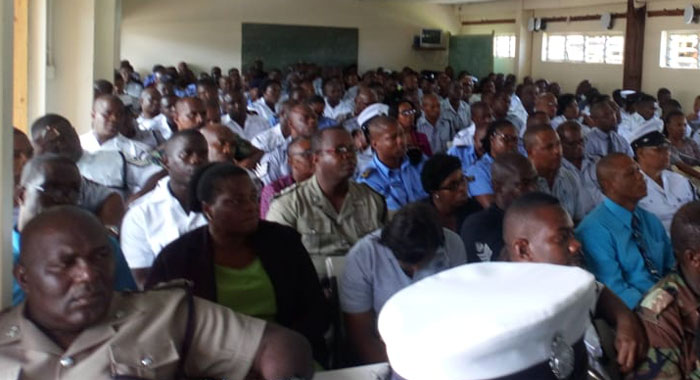 Police officers at the meeting on Monday.

Prime Minister and Minister of National Security, Ralph Gonsalves, has urged police officers to know their duties and responsibilities and the powers vested in them by the laws of St. Vincent and the Grenadines as Police Officers.

He delivered the admonition on Monday during a meeting with the top brass and ranks of the Royal St. Vincent and the Grenadines Police Force, at the Old Montrose Police Station.

Gonsalves said every police officer, regardless of department, division, or station to which they are attached, should seek to enforce and uphold the laws of SVG.

Touching on the current debate on noise and the Noise Act, Gonsalves told the officers  they should not turn deaf ears to this issue because they are not attached to the Traffic Department

He stressed that the portfolio of every police officer should incorporate all of the duties and offences encapsulated in the Police Act and the Criminal Code.

Regarding crime fighting, the Minister of National Security spoke about the resources that have been provided to the constabulary to fight crime.

He said police officers are trained on a continuous basis, both locally and internationally.

He further pointed out that the size of the constabulary has increased to 900 officers and police stations have been built or refurbished since his government came to office in March 2001.

The prime minister said these initiatives are geared toward improving the crime fighting strategies and response capabilities of the police force.

He lamented the need for police officers to practice effective community policing and advised officers not to stay in the stations but to go out in the communities to “meet and greet”.

Gonsalves said that by so doing, the public’s trust in the police will be improved, thereby allowing for more productive police-public partnerships.

This, he said, will augur well for crime-fighting in the country.

Gonsalves urged the officers to be advocates of the constabulary’s agenda and not to act contrary to it.

He admonished police officers to take time out to prepare their case files in a more professional and timely manner.

Gonsalves, a lawyer, said an incomplete or under-investigated case file gives the defence the upper hand during a trial and as a result, the perpetrator of the crime(s) could walk free.

8 replies on “PM urges police officers to know their duties”