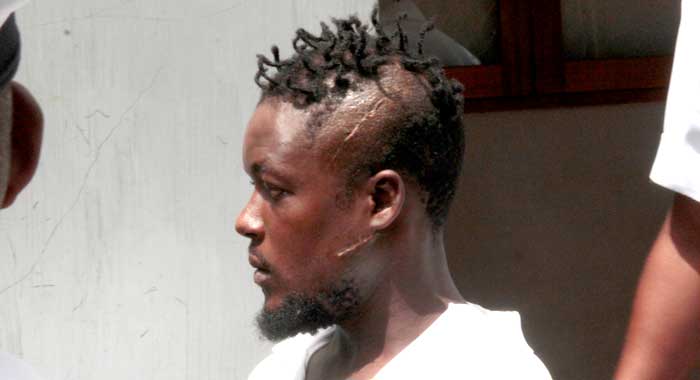 Alphious Stephenson was remanded in prison on Monday. Here, the injuries he suffered in an alleged attack on Sept. 6 are quite pronounced. (iWN photo)

A Campden Park man is in hospital with a severed hand and other injuries, while another villager has been remanded in custody in connection with the crime.

Alphious Stephenson was denied bail when he appeared before Chief Magistrate Rechanne Browne-Matthias at the Serious Offences Court on Monday.

He was not required to plead to the indictable charge that on Sept. 13 at Campden Park, he wounded Deon Baptiste of the same address.

Senior Prosecutor Adolphus Delplesche objected to bail, telling the court that the virtual complainant is in hospital with cutlass injuries.

“One of his hands has been severed,” Delplesche told the court, adding that the investigator, Detective Corporal Philbert Chambers, cited doctors as saying that Baptiste has a chop wound to his back through which his intestines were visible.

“All these, according to the doctor, are serious,” the prosecutor told the court, adding that Baptiste should be undergoing surgery this week.

The prosecutor told the court that the detective had obtained a doctor’s report, in case Stephenson was remanded.

He said that Stephenson had been hospitalised as a result of the injuries that aroused the magistrate’s concerns.

The court heard that Baptiste is alleged to have chopped Stephenson on Sept. 6, resulting in him spending seven days in hospital.

Stephenson reportedly attacked and chopped Baptiste about a week after the alleged attack on him (Stephenson).

The prosecutor told the court that Corporal Chambers said he had urged Stephenson to report to investigators the medical injury form he had been issued after the alleged Sept. 6 attack that left him nursing injuries to his head.

Delplesche said: “Chambers say, ‘Me beg um (him) like ah dog to bring back the medical forms he never bring them back.”

The prosecutor told the court that when the detective obtained the forms from Stephenson, they were incomplete, suggesting that he had never given them to a physician to complete.

The senior magistrate decided to remand Stephenson until Sept. 21, noting that the virtual complainant’s injuries are serious and potentially life-threatening.

She said that while the accused might have also suffered, he was before her in a different capacity — as an accused rather than as a virtual complainant.