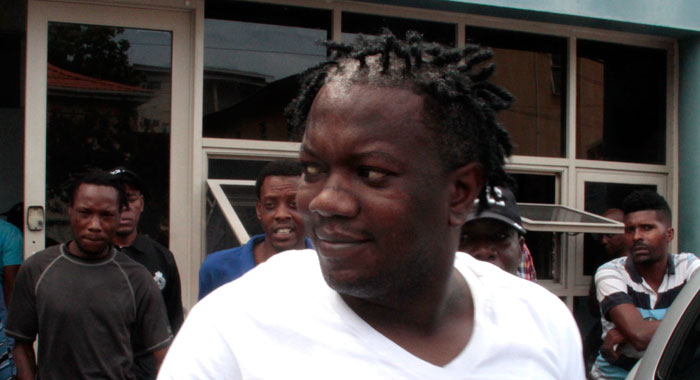 The suspended police officer who is being tried in connection with a burglary at the Postal Corporation in Kingstown has been slapped with unrelated gun and ammunition possession charges.

On Wednesday, Police Constable Ettian Charles, 34 of Arnos Vale, was, for a second consecutive day, denied bail on charges that on Sept. 17, he had one black and silver Smith and Wesson .38 revolver serial number unknown, and six rounds of .38 ammunition, without a license issued under the Firearm Act.

He pleaded not guilty and was denied bail when he was arraigned before the Family Court on Tuesday.

The matters were adjourned and transferred to the Kingstown Magistrate’s Court for Wednesday.

When the matter came up on Wednesday, Senior Prosecutor Adolphus Delplesche maintained his objection to bail.

The prosecutor said he was objecting to bail on similar grounds as he did for three men who are charged with last Saturday’s robbery, in Cedars, of Reisha Twana Browne-Caesar, wife of Minister of Agriculture, Saboto Caesar.

Delplesche said that the police are investigating a series of crimes in which the men are persons of interest.

The prosecutor noted that the suspended cop is on bail for burglary and a conspiracy charge.

He said the trial is expected to conclude soon at the Serious Offences Court.

Charles told the court that he was being represented by Israel Bruce, but Bruce was not in court on Wednesday.

When Senior Magistrate Rickie Burnett asked Charles to address him on the issue of bail, the police officer noted that he is charged with firearm and ammunition possession.

He said that the charges were brought against him because police searched a house occupied by several persons.

The defendant said police officers took him to the police station and brought the charges against him.

Charles said he should be granted bail, adding that he does not think that only he should have been charged with the gun and ammunition offences.

He said he has children 5 and 7 years old as well as a blind father.

The accused man further noted that he is not charged with burglaries or robberies although the prosecutor had mentioned those crimes.

“If I was charged with these, I would have understand,” he said.

He told the court that there are people who could attest that the firearm does not belong to him.

Charles told the court he has seen cases where people charged with more serious offences were granted bail.

The magistrate, however, told the accused man that he can apply to the High Court for bail, but for the time being, he is remanding him into custody until Oct. 8, when his trial is slated to begin.

Charles is being tried in connection with the July 7, 2017 burglary of the St. Vincent and the Grenadines Postal Corporation, during which he is alleged to have stolen EC$74,121.46 in cash and other items, valued an additional EC$17,486.96.

He was further charged that on July 7, 2017, at Kingstown, being employed in the Public Service and being charged with the performance of duty by virtue of such employment, agreed to receive property for himself or any other person on account of anything omitted to be done by him in the discharge of his duty of office as a policeman.

He was granted EC$130,000 bail with one surety and was ordered to report to police on Mondays, Wednesdays, and Fridays between 6 a.m. and 6 p.m.