Man accused of robbing Minister’s wife agrees with no bail 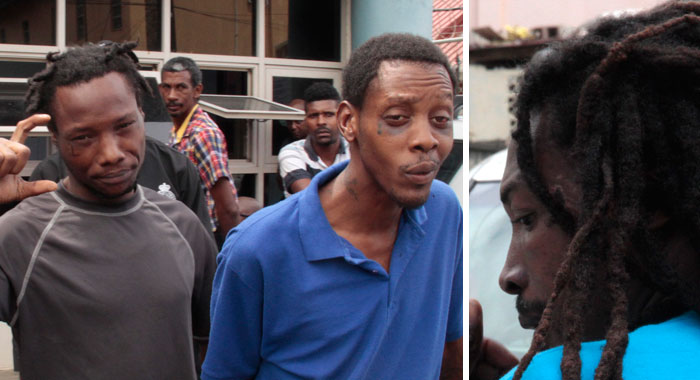 One of the men charged with last Saturday’s robbery of the wife of Minister of Agriculture Saboto Caesar has agreed with the prosecution that they should be held in custody while police conduct further investigations.

“Well, I agree with the prosecutor. Leh the investigation go on more,” Elroy Rogers, a 26-year-old labourer of New Montrose told Senior Magistrate Rickie Burnett at the Kingstown Magistrate’s Court on Wednesday.

His comment came even after his two co-accused told the court that they should be granted bail.

Rogers, along with Glenville Harry, 34, self employed, of Vermont and Rocuan Robinson, 29, a mechanic, of Campden Park, are charged that on Sept. 15,  at Cedars, being armed with a gun, they robbed Reisha Twana Browne-Caesar ,of a quantity of items valued EC$10,350.50 and other documents.

The men appeared before the Family Court on Tuesday and the matter was adjourned and transferred to the Serious Offences Court on Wednesday.

Senior Prosecutor Adolphus Delplesche told the court that the arresting and investigating officer, Detective Sergeant Bristol, said she is looking at a four-month window before the commencement of a preliminary inquiry.

“Because these matters, your honour, are hinged to other investigations,” Delplesche said and told the court that the prosecution was maintaining its objection to bail.

“… there have been a spate of these offences across St. Vincent and the Grenadines and the investigators are looking at this investigation as the impetus that can lead them into other reports of this nature and of a more serious nature.

“And they are of the view that should these accused persons be granted bail at this juncture, they can hinder the progress of those investigations.”

He said the prosecution and the investigator know that they cannot keep the accused persons in custody forever.

Delplesche, however, asked the court for a few more days “to scratch the surface.

“Because fruits are there and fruits can be produced. So give us a few more days, your honour, to properly investigate these matters,” the prosecutor said and told the court that the state is aware of the presumption of innocence.

“But the state must also have an opportunity to put their house in order properly to protect the citizens of this blessed land.”

The magistrate then asked the prosecutor to address him on the definition of “few more days”.

Delplesche said, “Few is figurative in this sense.

“It will need more time than a few more days; a lot more,” he said, noting that the investigator had asked for four months.

He said that as it stands, the investigation would take another three months, with an additional month for preparation of the files.

Asked to respond to the prosecution’s submission, Harry, who did not have a lawyer, said he should be granted bail because he is innocent and has an 11-year-old son who is a Form 2 student.

He further said he has a bar that he operates in Vermont.

“I think as a citizen of St. Vincent I should be getting bail. They didn’t catch me with nothing. They catch the other guys with the things and want to put it on me.”

He said “people” told the police that he was there.

“I think I should get bail because I am innocent,” Harry maintained.

He suggested that as a condition of bail, the court could ask him to report to the police station everyday and order him to surrender his travel documents.

Meanwhile, Robinson, who also did not have a lawyer, said he would like to be granted bail because he had a daughter and a son.

And Rodney, who also did not have a lawyer, seemed to think that being denied bail is in his best interest.

He sided with the prosecution saying that the court should allow the investigation to go on.

The men were denied bail and a bail review was scheduled for Oct. 10. A preliminary inquiry is slated for Jan. 14, 2019.