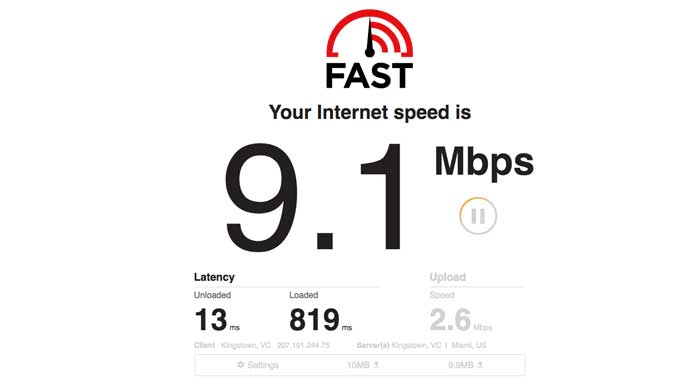 The internet speed on a computer powered by Flow’s broadband as registered in Rillan Hill at 8:33 p.m. on Wednesday, Oct. 3, 2018. (iWN image)

More specifically, the Minister of Information, Camillo Gonsalves, wants you to send them to the telecommunications regulator.

His request came on Monday at a press conference at which he spoke sceptically about the upgrades to its network announced by telecommunications provider, Flow, last month.

Gonsalves said that one-third of persons interviewed by the National Telecommunication Regulatory Commission (NTRC) say their broadband service is bad or poor.

He said that one-third is concentrated in areas outside of the Kingstown, Arnos Vale, southern loop of St. Vincent.

“As you leave that area, people complain more and more about their service, so as you go north, you may find some villages where 50 per cent of the people consider their service to be poor,” he said.

He told the media that the NTRC is compiling this data for him.

“I am going to give Flow a little bit of time to work out whatever kinks in their new infrastructure but I want people to know that I am aware of this issue.

“The issue is unacceptable and that within the confines of what we can do in ECTEL (Eastern Caribbean Telecommunications Authority) and what we can do, legislatively, we intend to take action if there is not an appreciable improvement.

“This is not a knock on Flow’s local office. I think they are doing excellent work. But as Flow has been acquired and re-acquired and re-re-acquired by ever-larger entities, St. Vincent and the Grenadines’ market becomes ever less and less significant to them. And so the investments that flow to St. Vincent and the Grenadines’ infrastructure, to my mind, have become less of a priority.”

He said that the government has done some things, including denying Flow a new licence that they had asked for.

“… because we don’t see that they have justified a new licence. There are some spectrums that they want for mobile phone services because they are making money on mobile phone but we haven’t given them that spectrum until they sort out some of these problems.

“And, of course, as I have been promising as minister of information for a while, there is a new bill coming. It’s been finally approved by all the members of ECTEL that we will be able to legislate, hopefully by the end of this year so that we can put some actual penalties against them.”

Gonsalves said that under the existing law and licences, his government does not have the capacity, legislatively, to punish Flow for “bad performance”.

“We can only cajole them and maybe not give them a duty free concession and maybe withhold a licence and these sorts of things. But, hopefully, when the law is passed, we will have greater — more option to get some results but it’s an issue I am aware people are discussing and it’s been unsatisfactory for very long time.”

The minister said he hopes that the letter that they sent him in September detailing the upgrades “reflects an accurate assessment of what they expect to happen and I am asking people to take a screen shot of your speed and send those screenshots to the NTRC, let it add to the data that we are compiling here at the NTRC about the type of speeds and the reliability of that information.

“Share it with us. Not anecdotes, data, share data with us and we will add it to our data and when we have data and not just stories … we can act more efficaciously in that regard,” Gonsalves said.

One reply on “Camillo wants your screenshots”