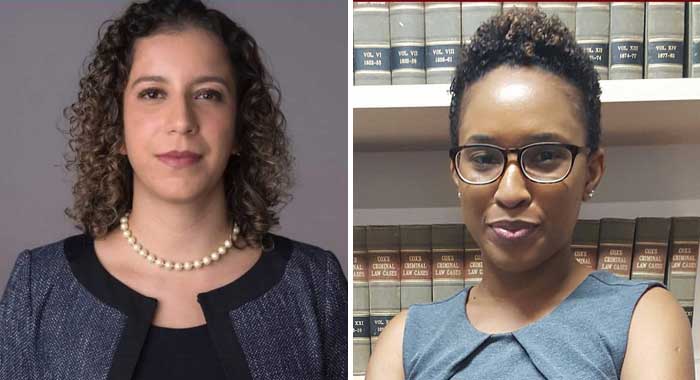 The children of two current and one former Cabinet minister are among “six or so persons” appointed recently to the St. Vincent and the Grenadines United Nations Mission.

After a decade as a deputy ambassador, Nedra Miguel has been appointed to ambassadorial rank, as St. Vincent and the Grenadines prepares to bid for a non-permanent seat on the United Nations Security Council next year.

Miguel, who is daughter of former deputy prime minister, retired politician Girlyn Miguel, was deputy ambassador to son of Prime Minister Ralph Gonsalves, Camillo Gonsalves, during his tour of duty.

Gonsalves’ elder daughter, Isis, who spent a stint as a speechwriter to the President of the United National General Assembly last year, has now been appointed to Kingstown’s mission there.

Also appointed to the mission is lawyer Jimesha Prince, daughter of Minister of Education, St. Clair Jimmy Prince. Prince’s LinkedIn profile says she is a counsellor at the SVG UN mission.

After being asked specifically who they are, Prime Gonsalves disclosed the names of some of the new appointees, saying he had forgotten who are the others, at a press conference in Kingstown on Tuesday.

In his initial comments on the matter, the prime minister said Kingstown has sent to its UN mission an additional “six or so persons, including someone who studied international relations and who has been in Moscow for five years and he is fluent in Russian.

“We have somebody who studied in Latin America, in Venezuela and she is fluent in Spanish. Of course, you have other persons who speak Spanish and French on the staff.

“And someone is also on the staff who has a working knowledge of Mandarin. Like all languages, if you don’t use them, you slip. So I have been advised.”

He further said that the group is composed of “mainly young persons, professional people to assist with the increased work load as we get closer towards the June election [for the Security Council] and we will have to send more staff members to man the mission in respect of sitting on the security council, if, indeed, we win.”

He said “one other senior person” at the mission has been accorded ambassadorial rank in addition to Rhonda King.

“Because there are some meetings, as we are preparing and when we are actually there, where you can’t send somebody other than someone with the rank of an ambassador to be engaged in certain kinds of dialogues. So it’s a very important internal development in the mission to carry out the additional work of our mission.”

Asked who are the new appointees, Gonsalves mentioned Miguel, noting that the longstanding foreign service professional has been deputy to Camillo and King.

“The new persons who have gone up there, well, the young man I spoke about who did Russian, I can’t remember his last name. Well, his first name is Ellis. I am trying to remember his last name, but we could have that,” said Gonsalves, who is famed for his ability to recall facts and names.

The prime minister said he was not sure what is Ellis’ precise designation.

“Because Rhonda King, she puts different people to different things.”

“Someone from a humble family, as far as I understand,” he said of the new diplomatic staff.

“There is Jimesha Prince. She is trained as a lawyer. She worked at the NIS (National Insurance Services) and then was in the prosecutorial service. She is there. There is another male. I can’t recall his name now. And then there is Isis, my daughter.

“Isis worked last year as a speech writer to the president of the general assembly, one of the two or three speechwriters. In fact, I happen to know that the successor, the new president from Ecuador, she wanted Isis to remain on the staff, but Isis didn’t, you know, she prefers to be elsewhere.”

Gonsalves said there is another individual whose name he cannot recall.

He said that Gareth Bynoe would come to New York from SVG’s embassy in Washington.

Bynoe holds a first degree and master’s degrees from universities in Latin America.

The prime minister said that the new diplomatic staff also includes Roxanne Russell, who studied in Venezuela and was a public servant before her latest assignment.

Gonsalves said that his daughter is “familiar with Mandarin”, having studied the language for a year in Taiwan.

He, however, said that his government would like to have at the United Nations somebody who is fluent in Mandarin rather than someone who just has a working knowledge of the language.

“In fact, people are very impressed by the number of persons who have different language skills or familiarity with languages and different countries and cultures. So we are trying to build that kind of a group. But they have a good staff building and a mixture between some more mature persons who are there and younger people who are going. So it is shaping up ok. It is not yet completely shaped, but for the task at hand, but thus far.”

He said that some persons are involved to help with the more detailed administration while other would help with different things, including legal work and international relations.

“And even those with legal work help also with international relations issues.”

He said the appointees are “children of the education revolution who are really bright young people who are given, who are getting opportunities.

“And I know when I talk about bright young people and my daughter is among them, they would say, ‘Well, boy, Ralph is tooting her horn.’ But she has demonstrated in her work from secondary school going onwards…” the prime minister said.

“As you notice, from the names, we are giving a lot of young people opportunities and before the end of this year, I am hoping we will be able to make announcements in relation to who will go to Taiwan. We have to send somebody to be the ambassador and somebody to be the deputy,” he said.