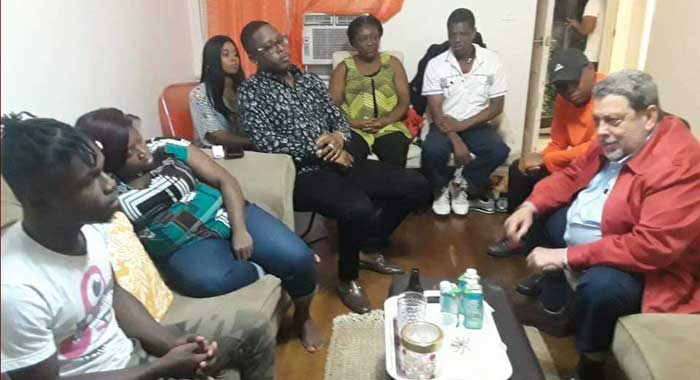 Prime Minister Ralph Gonsalves says his schedule in New York did not allow for a town hall meeting. He met instead with persons in their homes.

Prime Minister Ralph Gonsalves says the fact that he did not have a town hall meeting with Vincentians in New York during his visit last month had nothing to do with fear of protestors.

“New York City is very favourable territory for De Comrade and for the ULP. And any few persons who want to come, if I am holding a town hall meeting to disrupt it, the ULP supporters will put them under manners and other decent people would do so. So I don’t have to worry ‘bout nothin’,” Gonsalves told the media in Kingstown on Tuesday.

Gonsalves usually has a town hall meeting in Brooklyn when he visits New York to attend the United Nations General Assembly.

However, in recent years, some of these meetings have been noisy affairs.

At the town hall meeting in September 2016, then 47-year-old Miranda Wood stepped up to the microphone and told the prime minister that he had attacked her in  his office in Kingstown when she was 15 years old.

No town hall meeting was held in New York this year although the prime minister spent two weekends in the North American city, staying from Sept. 19 to 30.

He met, instead, with some Vincentians in private homes.

“On this occasion, given the way I had my visit organised, it was difficult to do it any other night other than a Saturday night. The Saturday night before, I was in Brooklyn, I was by people’s homes, a lot of people came by and — usually kind of a visit. It wasn’t possible, in terms of things which I had scheduled to have a town hall meeting and I had made that plain to the consul general when he asked me….” Gonsalves said.

He said that he understands that because he did not hold a public event with Vincentians, it was being said that he was afraid of some persons who would use the opportunity to protest against him.

“I mean, that is just preposterous,” the prime minister said, but noted that Vincentians in New York look forward to the annual meeting with him.

He said that when he called from New York a radio station in St. Vincent he was told that it was being said that he is changing the time he was speaking at the United Nations because he was trying to trick persons who were planning to protest.

Gonsalves said he told the host, “… those handful of people are the furthest thing from my mind.

“You think I go about my business worrying about a few people and the very fact that — I mean, look at where we reach not that at a press conference on serious issues, that some people who want to say something, I mean they can say whatever they want.”

He said that at the United Nations he has no control over when he speaks, adding that he understands that five protesters went in front of the SVG Consulate to protest against him and Consul General to New York, Howie Prince.

“I don’t know – the thing was so insignificant, I heard about it Saturday night, I just choops (kiss) my teeth. These things are not of any consequence and you all must not elevate these, I suggest, these really insignificant things. People will talk about all sorts of things they want to talk about. I am a man, who when I start politics, I would go into the most hostile areas to speak and I talk,” said Gonsalves, who mentioned the protesters when asked why he did not hold a town hall meeting.

He said he went to New York a few days before the UN meeting, adding that after arriving in New York on Sept. 19, he hosted a luncheon organised by his country’s UN mission to meet with all the ambassadors from the Latin American and Caribbean Group (GRULAC).

St. Vincent and the Grenadines is seeking to seeking to represent that group as a non-permanent member of the Security Council for the 2020-2021 term.

The elections take place in June next year.

“So the campaign is heightening,” Gonsalves said, adding that on the following day, he had bilateral meetings.

He didn’t take along anyone else official other than Eloise “because we have a good team up there”.

He said that as the spouse of the Prime Minister, Eloise has her own programme at the UN.

Gonsalves said that on the second Saturday night he spent in New York he had meetings and that he could not have had them at any other time.

“So there is nothing mysterious,” he said, reiterating that at times he has had neither a reception nor a town hall meeting with Vincentians in New York.

He said he would be advised on whether or when to hold reception or town hall meetings, provided that it is consistent with the schedule of the work he set out to do while in New York.