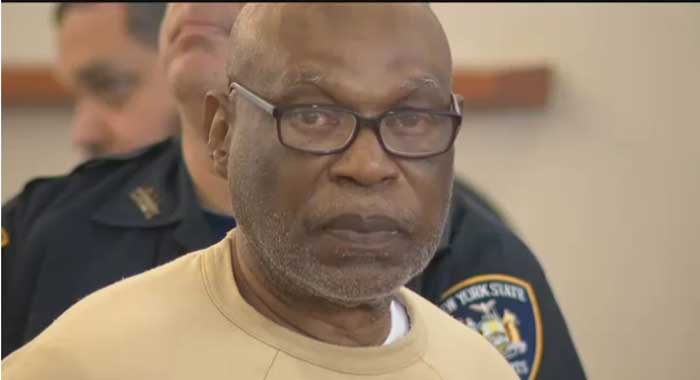 William Caruth has been jailed for killing his daughter.

A St. Vincent-born man has been jailed for 25 years in the United States for killing his pregnant daughter and hiding her body in his apartment in January 2016

He was convicted of manslaughter in connection with the death of his daughter, Anndrea Caruth.

As part of the sentencing, letters were read from the victim’s fiancé and cousin.

“What has been taken from us is a vibrant, hard-working, full-of-potential, young lady. Angie’s friends understand that we cannot bring her back, but we are asking that justice for Angie be rendered,” said a woman who was no identified in a News12 video posted online.

The judge said the man showed no remorse.

Prosecutors said Andrea Caruth’s body was found hidden behind a wall in her father’s closet.

They said it appears she was hit by a hammer and strangled.

Additional evidence was also presented over the course of the trial, included DNA samples taken from beneath the victim’s fingernails.

In his plea to the judge, the convicted man said: “I dream about my daughter everyday, I cry, I cry everyday. I miss my daughter.”

In January 2016, Andrea’s mother, Clorence Collis, of Penniston, St. Vincent, told iWitness News she was looking forward to reuniting later that year with her daughter and the child she was scheduled to give birth to.

It would have been Andrea’ second trip to St. Vincent since she migrated to the United States with her father two decades earlier.

Andrea’s body was found six days after she went missing.

Her father was a teacher at the Buccament Government School, in Dubois, before migrating to the United States in the 1980s.

Click the link below to read our 2016 story here.