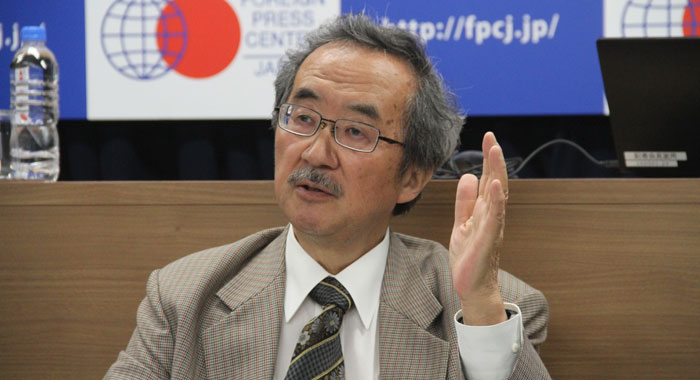 TOKYO — A culture of respect for laws, instilled from childhood, has helped Japan to increase the speed with which it rebounds after a disaster.

Further, Tokyo uses taxes and government bonds to help to finance the post-disaster recovery, Kiyotaka Akasaka, president of the Foreign Press Center Japan (FPCJ), told a group of journalists from the Caribbean and the Pacific on Monday.

The FPCJ, a private organisation, says it helps reporters of foreign press organisations “cover Japan, to promote accurate understanding of Japan in other countries”.

Akasaka, a former United Nations undersecretary, said Japanese are taught to obey rules even if they don’t agree with them. This translates into a high rate of adherence to the country’s construction laws.

He said it is common to see people waiting for the right of way to cross at traffic lights, even if there are no vehicles approaching.

“If you don’t like the laws, change them through Parliament,” he said, adding that in the long run, a culture of respect for the law leads to greater enforcement rates and a quick rebound after a disaster.

Sometimes, the government has to resort to increasing the national debt, which stands at 230 per cent of GDP — the highest in the world, Akasaka said.

However, most of Tokyo’s national debt is held by Japanese citizens and corporations.

He said the country’s national debt has increased significantly because of the need to respond to national disasters.

For example, Japanese taxpayers are still financing the cost of recovery after the 2011 earthquake and tsunami, which left more than18,000 dead or missing and resulted in some 133 trillion yen (approximately US$26.6 billion) in loss and damage.

Akasaka said this entrenched respect for the rule of law has improved Japan’s profile internationally.

He said Japanese police are in high demand to serve as UN Peacekeepers because they are hard-working, disciplined, and cooperative.

Locally, this is reflected in a low crime rate, a high rate of apprehension of criminals and few corrupt police officers. “The judicial system is in good shape – independent,” Akasaka said.

The journalists — two from the Caribbean and three from the Pacific — are in Japan for the 2018 Pacific-Caribbean Journalists Program.

The programme, which is in its fourth year, focuses on the environment and disaster preparedness, and this year includes two Japanese journalism students who will take up journalism jobs early next year.

It is sponsored by the Tokyo-based foundation the Association for Promotion of International Cooperation (APIC) and the FPCJ.

Included among the issues to which the journalists will be introduced are Japan’s earthquake and tsunami warning system, and how public schools have incorporated into their curricula lessons learned from the 2011 Great East Japan Earthquake and tsunami.

The journalists will also make site visits to areas in the Tohoku region that were devastated in 2011 to see how they are recovering, and find out how regional news media covered the disaster and the lessons they learned from that tragedy.