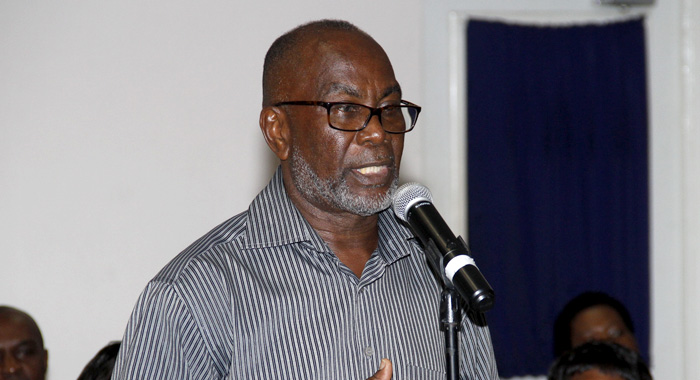 A visit to an organic store in Brooklyn caused Member of Parliament for Central Kingstown, St. Clair Leacock to consider how Vincentians in New York might feel about unrealised potential in St. Vincent and the Grenadines.

“And I am sure that ever so often, you are hanging you head in shame and disbelief when you see the things that are being sold here in New York and are lying waste in St. Vincent and the Grenadines…” he told a town hall meeting in Brooklyn last weekend.

“We have to do much more and better and begin picking from the low hanging branches,” he said at the event, organised by the New Democratic Party, of which he is a vice-president.

“… We are stuck in a way that is resolute and determined that once this regime is in office, this one would graze and this one would starve. You can’t build a society like that,” he said, referring to the Unity Labour Party administration of Prime Minister Ralph Gonsalves.

“And today, we are in St. Vincent having sown bitter seeds and reaping an even worse harvest,” he said.

Leacock said, adding that in St. Vincent it has become a joke to say, “Wait, nobody ain’t dead today?’” he said, referring to the homicide situation in the country, where 25 persons have been killed so far this year — fewer than the corresponding period for 2017, when the nation recorded 39 homicides overall.

“That’s what we say in St. Vincent right now, there are four shot and one dead,” he said, referring to the incident in Paul’s Avenue midnight Saturday.

“But that was this morning, because tonight, it might change. When you have a country that a persons who could be brave enough to say, ‘Ah think ah going rob da policeman dey’,” Leacock said, adding that he grew up in an age when parents told misbehaving children that they could call the police to lock them up.

“Now a man watching a police and say leh we rob he and the head of government saying we don’t have a problem? But I didn’t come here this evening to talk about that,” adding that he would speak about something deep and more fundamental than that and get back to why the nation is in “this mess of crime and violence.”

Leacock’s comments came at an event where he said he approached police over fear that one of his constituents who was to give evidence in a matter would have been murdered, as was the case last year.

He said that the NDP, under the capable leadership of Opposition Leader, Godwin Friday continues to put trust in the people it wants to serve and to look at the problems of SVG through their eyes.

“And for that, we are getting closer and closer to 20-20 vision and with God’s help, we will solve the nation’s problems,” he said, apparently punning also on the year when the next elections, constitutionally due by March 2021, is expected to take place.

“It doesn’t need rocket science to come to grips with the reality that a 150-square-mile island with a 100,000 population cannot, looking internally, solve all of its problems.

“It cannot generate the economic activity on a domestic economy that can satisfy the needs of all of its people. And for that reason, as we have always been historically, we must be an outward looking people.

“And it begins with the embrace of you in the diaspora because you automatically enlarge the economic frontiers of the New Democratic Party of St. Vincent and the Grenadines and make what often times appears to be impossible the possible.”

“That’s not the St. Vincent our grandparents worked hard to develop. Imagine a St. Vincent and the Grenadines in which we could have household upon household growing soursop, which is good for medicinal purposes for the same teabags, for the food content, for the beverage content, creating opportunities for the many mouths that now can’t be fed to feed themselves.”

Leacock said creating a job does not mean having a person leave his or her personal dwelling and going to an establishment but means having that person get immediate access to resources that can generate income.

He said it includes the person who rings their small parcel of land with coconut trees and gathers the coconuts to get the milk to sell to the ice-cream parlour.