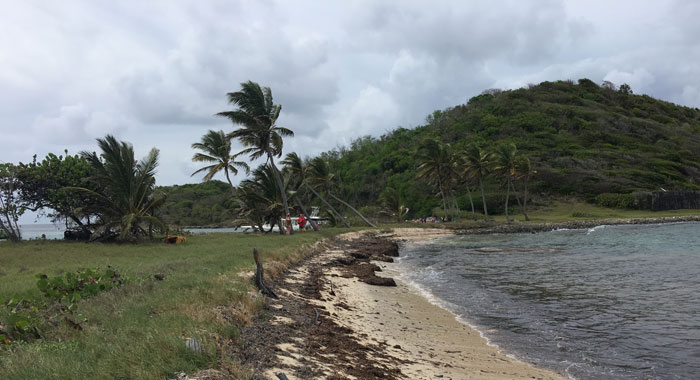 The Government of St. Vincent and the Grenadines is considering its option in addressing the situation in Mayreau, where sea erosion is threatening to split the southern Grenadines island in two.

Member of Parliament for the Southern Grenadines, Terrance Ollivierre, raised the issue in Parliament on Thursday.

The opposition lawmaker told Prime Minister and Minister of Grenadines Affairs, Ralph Gonsalves, that over the years, there has been movement of Windward Carenage Bay to Salt Whistle Bay on the island of Mayreau.

“This can result in the cutting off of Mt Carbuit from mainland Mayreau and also has implications for one of the most pristine beaches in SVG,” Ollivierre said.

The opposition lawmaker asked if the prime minister was aware of the situation and what can be done quickly to mitigate this problem.

“Mr. Speaker, what we are seeing there is a combination of the consequences of climate change and certain activities by persons in the area, persons who go there and who remove natural defences such as the mangrove, the manchineel, the sea grapes, coconut trees, and some, before then, the sea grapes,” the prime minister said.

He said that happens all over the country, adding that in Colonaire — on St. Vincent’s eastern coast — people have removed sea grapes and penguin (pandanus) trees as well as sand and gravel.

“And with the rising sea levels and wave action, we can have the removal of the sand. Well, what is happening there is that, as the question says, the Windward Carenage Bay is really moving towards Salt Whistle Bay and in the process having the destruction of one of our better beaches — in fact, a fantastic beach.”

Gonsalves said that his government has been working with a private sector operator who has the resources and equipment nearby to be able to do some remedial work.

He said there have been a number of suggestions by technical experts, including a quick fix of putting some boulders at the beach at Windward Carenage as a kind of mitigation.

“But much more is required than that and it is going to be a larger project. So, the long and short of it, the fight which we are having on climate change, is a fight which relates to what is happening at Salt Whistle Bay. Rising sea levels, wave action, and then, of course, people moving away a lot of natural barriers, which have been there.”

Gonsalves said that his government has to fashion a more comprehensive engineering solution.

“No quick fix is going to deal with that,” he said.

“Mr. Speaker, I want to say further that all of what I am saying, they combine with the sargassum weed which also contributes to the sand removal. A quick fix has to be done to help to preserve what we have, but that’s not going to be the long-term solution.

“When we talk about climate change and some people deny it and many of our own people scoff at it and when our people are not sufficiently alert and have not been in respect of the sea grapes and the manchineel, the mangrove, the coconut trees, even sand, we are paying for it. But it is not only our own fault in our own removal of these things but because of climate change.”

The prime minister said that this is also seen at Sandy Bay in St. Vincent, where the estimate for sea defences has moved from EC$3, to EC$11 million, to close to EC$20 million.

“And every time we do the estimate and the CDB [Caribbean Development Bank] takes long to process things, and we have another big wave action in addition to the continuous rise in the sea levels and eating away, the matter gets more and more expensive and I just want to say to the public that what we are seeing at Colonarie, Sandy Bay, all over St. Vincent and the Grenadines and very much so, dangerously at Salt Whistle Bay, is a combination of all these matters.

“… I am personally committed to doing everything that is necessary and desirable to mitigate this particular problem, but the mitigation of the problem for a longer-term process is going to require a bigger engineering solution.”

He said some persons have suggested that nothing be done and that the land will be returned in the natural course of things.

“That’s not a scientific approach. We have a difficulty and we are trying to help.”

Ollivierre noted that persons had hoped that the Big Sand area in Union Island, where widespread sea erosion has taken place, would have been restored naturally.

That has not happened.

“We hope that something can be done very quickly at Salt Whistle Bay,” Ollivierre said.

“You are quite right to raise Big Sand because that is another area. I could mention several others. I’m glad you raise that one also. Similar kind of problem we are having, though the one at Mayreau, at Salt Whistle Bay is a more extreme situation.”

2 replies on “Wave action threatens to split Mayreau in two”