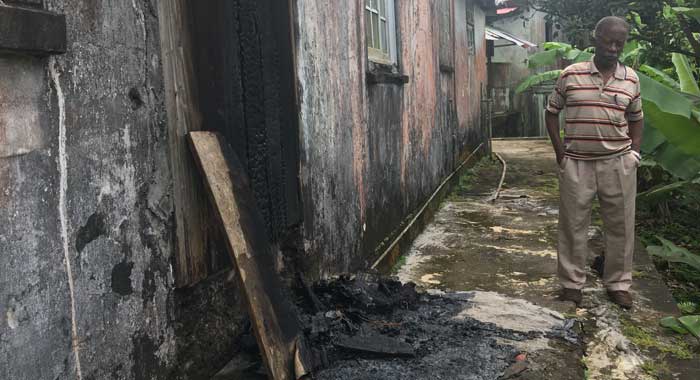 Farmer Hugh Stewart stands outside his house, which was set afire on Oct. 11. (iWN photo)

The years-long terrorism of 74-year-old farmer Hugh Stewart in Collins continued two weeks ago with his house being set ablaze and several of his windows shattered.

Stewart, who lives alone near the main road bounding his 40-acre farm has complained to iWitness News about repeated acts of vandalism at his home.

In November 2015, Stewart’s office building and a packing shed in his banana field were burnt down and some 300 bunches of banana at his farm were cut from the trees and left on the ground.

The criminal onslaught at the man’s home began around mid-2015 sometime after he found a gun in a building on his farm and summoned the police.

In one of the first attacks on the farmer, unknown persons burnt two of his banana sheds; burglarised his house, left threatening messages on the walls inside his house; and set his vehicle on fire in August 2015.

Stewart told iWitness News that he was lying in bed, reading, when he smelled smoke.

“So I got up, I see smoke coming from the back door and the back bedroom,” he said.

He shouted “Fire! Fire!” nobody answered or responded.

He was went outside to check for some buckets, but they were not where he had stored them, having apparently, been removed by the arsonist.

Stewart was able to get the assistance of a neighbour and they put out the fire, which had been set to the wooden door to the back of the ground floor of the two-storey building.

By the time he went back inside the house, a brown bag he had left on the couch was gone.

He called the police, who eventually came. They looked around, promised to return Friday morning but never came back until Monday, Stewart told iWitness News.

“It’s a problem living in this country now,” he said, adding that he did not see anyone around the property when he noticed the fire.

He reiterated that he has been having problems at the property for years now.

“This year more than ever,” he said, adding that in February, someone opened the pipe outside the house and knocked over some boxes.

He rushed outside, leaving the door to the house open.

By the time he went back inside, his wallet had disappeared, and he had to go and cancel all of his cards and apply for new ones.

A fortnight after they opened the pipe again, but he did not go outside.

He called the neighbour and the police. The police told the elderly man not to go outside.

He stayed in and the assailant took a conch shell and broke a window.

“I still did not go outside,” Stewart said.

About a month after, they went into the house and got nothing.

About two weeks after that, they attempted another burglary, but was unsuccessful.

Three weeks before the most recent incident, they turned on the water. His brother was there and they went and turned it off.

The assailant threw the banana boxes down so they could get wet.

Stewart and his brother went outside and packed them up.

That same night, his assailants broke about four windows in the house.

“They want money. I’m the only person around here who pays lots of money for workers. So they believe I would have money on particular nights,” Stewart said, when asked why he thinks he is constantly targeted.

He told iWitness News he believes he knows who his assailant is, but said he would not give the name to the media.

He has, however, told the police who he suspects is terrorising him in his home.

Also on Oct. 11, the assailants set fire to the curtains at a bathroom window and broke the glass in an attempt to enter the property, only to be confronted by burglar bars.
Stewart said he had installed cameras inside the house, but someone broke in and got rid of them while he was overseas.

“The man above helps me and other people help me to get rid of them,” he said of his assailants, referring to the shooting death some time ago of a man in the community who he believed was among his assailants.

He said he plans to live on the property until he is “ready to go”.

The property is currently being advertised for sale.

“So if it is sold or a few lots, I would move on, abandon St. Vincent, go back to Union Island. I have a nice plot of land. Five acres. I will build a nice house there and relax. My family come and visit me there sometimes. I travel. I used to travel a lot. I will resume travelling.”