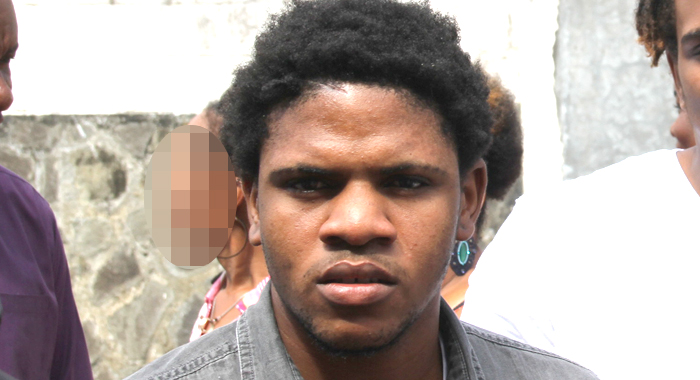 One of the two men given four-year suspended jail terms for burglary in February this year is now wanted for murder.

Police said Wednesday that Jerroy “Jay-Jay” Phillips, 22, a fisherman, of Redemption Sharpes, is wanted in connection with the murder of Sabitree Lyttle, a 56-year-old domestic of Hollywood, Redemption Sharpes.

Lyttle was found dead at her home on Wednesday afternoon when police responded, shortly after 2 p.m., to a call about gunshots in the Central Kingstown community.

Police say that Lyttle was apparently in a family-owned provisions shop located on the upper level of her house when she was approached and shot by some armed persons.

“Upon responding to the incident, Lytle was found unresponsive by the police on the balcony area of her house. The intent behind the shooting is not yet realised by the police,” police said in bulletin Wednesday evening.

Police are, therefore, soliciting the assistance of members of the public in locating Phillips, the bulletin said.

“The public is warned to exhibit caution, as Phillips is regarded as armed and dangerous,” police said.

Police said Phillip is 5 feet 4 inches, of slim build, fair in complexion. He has an oval face, brown eyes, thick lips, and a tattoo of a dove on his chest.

The magistrate decided to suspend the prison sentences for 18 months, which means that if the men are convicted of any crime within those 18 months, they would automatically go to prison for four years.

The men had also pleaded guilty to a charge that on the same date, also in Kingstown, they entered the St. Hill Insurance Ltd. building as trespassers with intent to commit an offence, to wit, theft.

Police arrested the men on the upper floor of the two-storey building when they responded to a report at 3 a.m. on Feb. 18.

They met the men with knapsacks containing tools — including a pig foot (crowbar) and screwdrivers, dark clothing, black gloves, black bandanas and other items.

The men were not represented when they appeared in court and pleaded guilty.

The court heard that they had both left school early, with Phillips, who was sending himself to Buccament Bay Secondary quitting in form 3 and becoming a fisherman after he had no one to represent him at the school’s parents’ day.

Hope’s parents took him out of West St. George Secondary last year after got into a fight in 2015.