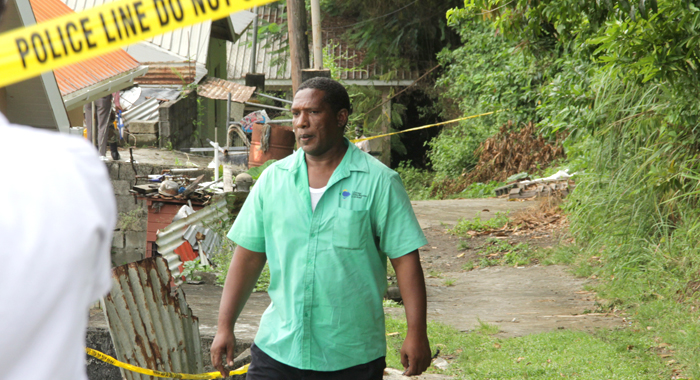 Brent Lyttle near his home on the day that his wife was murdered last November. (iWN photo)

Outside the cordon the police had put up as they investigated his wife’s murder on Wednesday, Brent Lyttle called on God for strength.

“Give me grace, Lord. Your mercy, Lord,” he muttered as he exited the cordoned-off area where the body of his wife, Sabitree Lyttle, a 56-year-old domestic, lay on the balcony of their Hollywood, Redemption Sharpes home.

It was shortly before 3 p.m., less than an hour after the man had received the news that his wife and mother of his three children — 19- and 17-year-old sons and a 15-year-old daughter — had been shot and killed.

Reports are that the woman was shot in the head.

Repeatedly, it appeared as if Lyttle was trying his best not to burst into tears — releasing the pain he was feeling inside.

Some onlookers repeatedly urged him to “cry it out”.

Lyttle, an employee of Coreas Distribution, was not at home when his wife was killed.

He told iWitness News that he had been told that there was a robbery at the house where they have been also operating a provisions shop for about 14 years.

“There was also forced entry into the shop. The door broke,” he said.

The widower said that his children were aware of what had happened to their mother.

“The big one is down there can’t hold up. I haven’t seen the second one yet,” he said, adding that he had asked one of their children’s aunts to pick up the youngest one at her school.

The killing brought, to a tragic end, the couple’s 20-year marriage.

It also brought to 31 the number of homicides in St. Vincent and the Grenadines for 2018.

About a third of those have occurred in Central Kingstown, according to Member of Parliament for that constituency, St. Clair Leacock, an opposition lawmaker, who was among persons outside the cordon.

“I know the people very, very well. They are my very strong friends, associates and supporters,” he told iWitness News, adding that Mr. Lyttle was deputy chair of one of his constituency groups for a long time.

“It is a very close-knit area, a very Christian area, much people being their brother’s keeper in this community,” he said.

Leacock described the family as “very quiet and private people”.

He said his understanding is that the family considered “protection” in the way the shop was built.

“At these times, you feel helpless, you can hardly speak. It is just saturated with these things. When will this all end?

Asked about his thoughts on the violence in sections of his constituency over the past few months, Leacock said:

“I have spoken enough on this. I think I have had about 10 in my constituency. Out of the first 10, I think I had five or six. So I am probably up to 10 out of the 30, 31 homicides. “Something really has to be done. There’s no quick fix, there is no easy solution, we have probably exhausted it, all sorts of remedies and solutions are being spoken about.

“But this is a society — clearly that has lost its way. You are not going to tell me the guy who was involved in the shooting today is some associated member of some group or some miscreant.

“They are simply people who have abandoned society and are all about self. And that’s where St. Vincent is heading, sadly. Self first,” Leacock said.

iWitness News understands that police have two suspects in custody in connection with the killing and are searching for a third man.

A wanted bulletin issued Wednesday afternoon says that police are searching for Jerroy “Jay-Jay” Phillips, 22, a fisherman, of Redemption Sharpes, in connection with the murder.

“The public is warned to exhibit caution, as Phillips is regarded as armed and dangerous,” the bulletin said.

Police said Phillip is 5 feet 4 inches, of slim build, fair in complexion. He has an oval face, brown eyes, thick lips, and a tattoo of a dove on his chest.