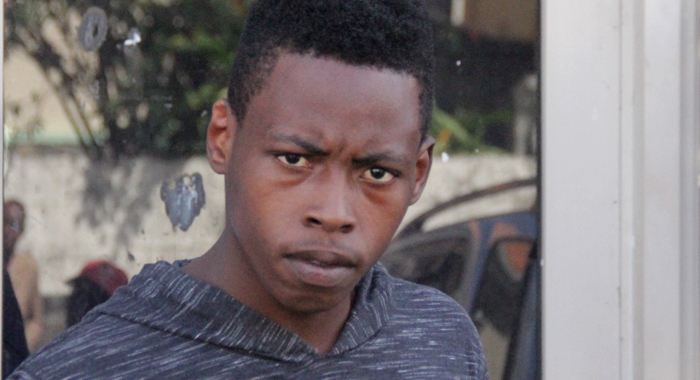 Aswell John will have to walk the straight and narrow for the next 12 months in order to avoid a three-year jail term. (iWN photo)

The 18-year-old youth who pleaded guilty to burglarising Democrat House, the headquarters of the main opposition New Democratic Party (NDP), has been given a chance to stay out of jail.

On Monday, Aswell John returned to the Kingstown Magistrate’s Court for sentencing after a two-week stay at Her Majesty’s Prison, while awaiting his sentence.

Senior Magistrate Rickie Burnett ordered him to pay EC$390 by Jan. 15, 2019 or spend three months in jail for damaging two hasps and staples, two padlocks and easel and whiteboard at Democrat House.

The man was further sentenced to three years in prison, suspended for 12 months, for burglarising the same building.

However, while he was free to leave the court on the burglary charge on Monday, John was further detained on an unrelated outstanding bench warrant.

The court heard that Tyrone James, general secretary of the NDP, is responsible for the party’s three-storey headquarters at Murray’s Road.

He received information the following day, and, as a result, went to Democrat House around 7:10 a.m.

On arrival, James noticed that some Hairoun crates were missing.

James also received a video of the defendant leaving the building with the crates.

The matter was reported to the police who arrested the defendant and charged him with theft of two Hairoun crates, one pack of exercise books, a package of food, one bag containing clothes, one 5-gallon bucket of paint, the property of the NDP.

Burnett noted that James had appeared before the court during the arraignment on Nov. 14 and had said that he was leaving it to the court to decide on the appropriate sentence.

John had told the court that he had dropped out of Emmanuel High School Mesopotamia because of poverty.