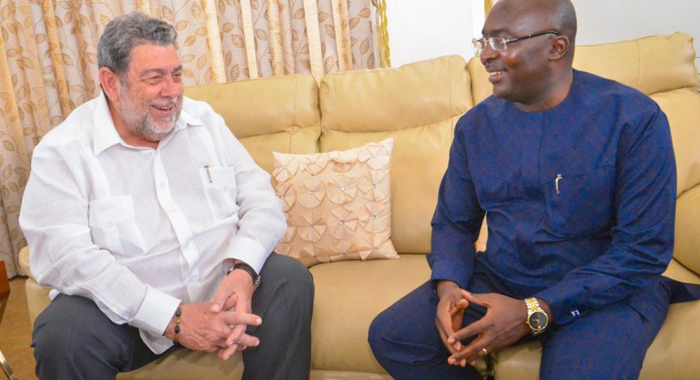 Gonsalves heads a delegation which includes SVG’s High Commissioner to London, Cenio Lewis and SVG’s Ambassador to the Republic of Cuba, Ellsworth John.

Today, Tuesday, Gonsalves will hold discussions with African Caribbean personalities in Accra, participate in a wreath-laying ceremony at the Kwame Nkrumah Mausoleum, pay a visit to the George Padmore Library and later pay a courtesy call on President Nana Addo Dankwa Akufo-Addo at the Jubilee House, the seat of government.

On Wednesday, Gonsalves will pay a historic visit to the Elmina and Cape Coast Castles, the two historic places that played significant roles in the Trans-Atlantic Slave Trade, which saw thousands of Africans shipped to the Americas to work in sugarcane plantations.

On Thursday, Gonsalves will pay a visit to the Council for Scientific and Industrial Research and later hold a private discussion with former President John Agyekum Kufour at his private residence in Accra.

Also on Thursday, Gonsalves will deliver a lecture titled “Rebuilding the African-Brazil-Caribbean Movement for Trade, Cultural and Diplomatic Enhancement” at the University of Ghana.

The event is hosted by the Institute for African Studies and will be open to the public.

While in Ghana, Prime Minister Gonsalves hopes to strengthen the relationship between both countries, form cultural linkages, look at avenues for tourism and investment promotion and help St. Vincent and the Grenadines enhance its Cocoa Production and research.

10 replies on “Gonsalves arrives in Ghana for official visit”