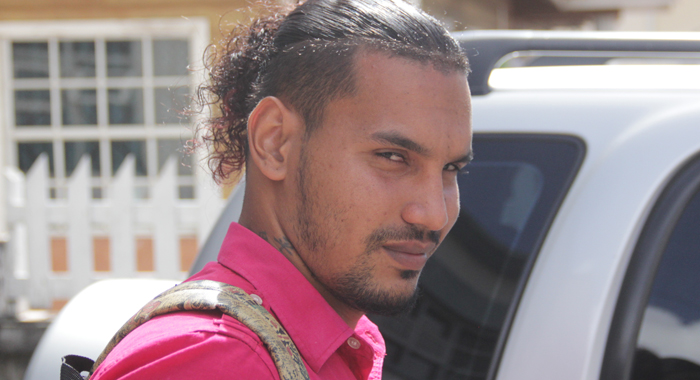 Rondale “Dog Man” Greaves, also known as “Smilie” use Facebook to track and recover four missing puppies that were worth EC$7,200. (iWN photo)

A dog breeder from whom four puppies worth EC$7,200 were stolen was able to use “VINCY BUY AND SELL”, a Facebook page, to locate the animals.

That’s what Rondale Greaves, of Dorsetshire Hill and Calder, told the Kingstown Magistrate’s Court on Tuesday as the trial of Andre Gibson and Jerroy Phillips began, on charges related to the theft of the animals.

Gibson is charged with handling stolen goods, to wit four puppies, a crime he allegedly committed between June 21 and 22, 2018.

Phillips is charged with handling stolen goods, to wit three of the same puppies during the same timeframe.

Greaves, who is also known as “Smilie” and “Dog Man” — because he breeds dogs — told the court that he knows the defendants well.

He said he owns a female pit-bull that he crossbred with an American bully, resulting in the birth, on May 3, 2018, of four puppies — three females and one male.

Greaves told the court that the puppies were kept in a pen at Dorsetshire Hill and were worth between EC$1,500 and EC$1,600 each at the time when they were stolen.

He said that on the night that the animals were stolen, he had stayed in Calder.

The following day, on realising that the puppies were missing, Greaves filed a report with the police.

Information led to Phillips and police went to his house and conducted a search, which did not produce the animals.

Phillips called Greaves asking him why he had caused the police to search his house, adding that he knew nothing about the missing puppies.

Greaves said he created a “fake” profile on Facebook and made a post on “VINCY BUY AND SELL” offering to trade an iPhone for pitbull puppies.

He said that Phillips’ brother responded to the post.

As a result of that response, Greaves, acting as the person proposing the trade-off on Facebook, agreed with the respondent to meet at a pet store in Stoney Ground.

Greaves told the court that he has a friend, Raffique Baptiste, who is also a dog breeder.

Greaves said he called Baptiste, and the detective investigating the case, but the police officer was unavailable because he was in court.

Therefore, Greaves and Baptiste came up with a plan that saw Baptiste going into the pet store with his phone in his pocket, while there was an active call to Greaves’ phone.

In this way, Greaves was able to follow the conversation that was taking place inside the pet store.

He and Baptiste agreed that when Baptiste had collected the puppy, that would be the signal for Greaves to come into the store and confront the suspected thief.

Greaves said that Baptiste and Phillips “agreed” that Phillips would give him one puppy for the iPhone and would sell him another for EC$500.

Greaves told the court that when he went into the pet store, Phillips, Gibson’s brother and two other persons were there.

As soon as Greaves entered the store, Phillips ran.

Baptiste later called him on his phone and asked him where were the other puppies.

Phillips later returned with another of the missing puppies, Greaves told the court.

They later agreed to meet in Paul’s Avenue, where Phillips handed over a third puppy to Greaves.

He told him that he had already traded the fourth puppy for drugs.

Greaves told the court that Phillips later showed him a photo of the fourth puppy.

He told the court that before the puppies were stolen they had been ill and were receiving treatment.

One day after Greaves got back the puppies, one died. Of the remaining two, he kept one and gave the other to the owner of the dog that is the puppies’ father.

Gibson is being represented by counsel Ronald “Ronnie” Marks, who, in cross examination, asked Greaves who had run from the store and who handed over the puppies to him.

In response to both questions, Greaves said it was Phillips.

Phillips does not have a lawyer in the matter.

During his cross examination of Greaves, Phillips asked Greaves if when he showed Greaves the photo of the dead puppy if he did not also tell Greaves that he had never received that animal.

Greaves said he could not recall.

“Did I not tell you it was only three puppies I received?” Phillips then asked.

Greaves said he couldn’t remember that.

Also on Tuesday Phillips was charged with robbing a man of a loaded gun, containing 19 rounds of ammunition and other items at Indian Bay on Nov. 1.

Last week, he was also charged with that about 2 p.m., on Sept. 19, at Mc Kies, he attempted to rob a 65-year-old businessman of Mc Kies Hill and in the process of doing so attempted to shoot the said businessman with a gun.

Phillips was also charged with boxing a 19-year-old bus conductor of Redemption Sharpes on his upper lip, causing him actual bodily harm about 5:30 p.m. on Oct. 6.

He was denied bail on the latest charge and returns to court on Nov. 28.