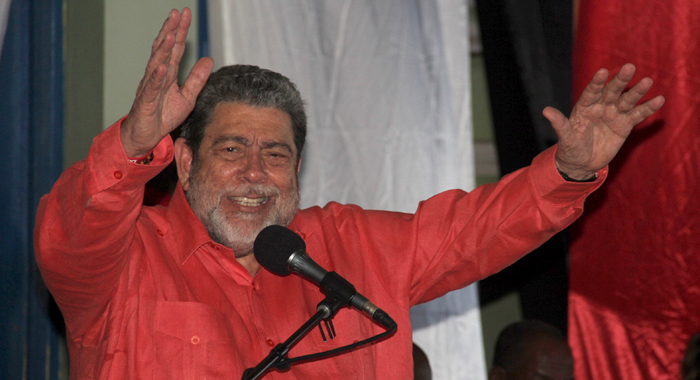 More than two years before general elections are constitutionally due, Prime Minister Ralph Gonsalves, on Sunday, began a bid for a fifth consecutive term in office for his Unity Labour Party (ULP), telling party supporters that they have an obligation to stop the main opposition New Democratic Party (NDP).

“You see this manifesto in 2015, all in this we are because this is our contract with you…” he said as he held up a copy of his party’s manifesto for the December 2015 general elections, noting that the government has a five-year mandate.

“They can make all kinda noise, they want to have election, now I hear they are worried about that,” he said of the NDP, which is challenging the results of the December 2015 vote.

The ULP was announced as winning a fourth consecutive term in office by taking eight of the 15 seats, a repeat of the 2010 results.

“We know that we didn’t thief any election, we know that the elections were free and fair, but they can go ahead,” he said.

“It’s not the first time they come with the same story, they came with that 2010. They try to manufacture evidence in 2010 about me, , and they failed — and others.”

Gonsalves was addressing the 23rd national convention of the ULP, which was held under the theme “Preparing The Way: Five Inna Row”.

“We have to stay away from them and the NDP had no leadership. And we must not be afraid to talk about leadership. Leadership is important,” said Gonsalves, who has hinted that he will lead the into the next election, going back on a promise he made in 2015.

In his two-hour speech, Gonsalves raised questions about the financing and intention of the recent trip to China by members of the NDP.

The NDP has said that if elected to office, it would break ties with Taipei in of Beijing, which considers Taiwan a wayward province that must be put to right.

Gonsalves accused the NDP of using its China trip to lay the basis for its economic citizenship programme, an initiative the ULP leader said would never be implemented as long as he is prime minister.

Gonsalves spoke of increased opportunities for Vincentians at all levels since the ULP came to office in March 2001.

He also said remuneration for government workers have increased between 60 to 100 per cent.

He reiterated that Vincentians are not better or worse off than anyone.

“We are our own Caribbean people with majesty of history and a trajectory for further development,” Gonsalves said.

“When you have that confidence, I can tell the young people to soar like eagles with your wings unclipped, that nothing is too difficult for you to attain, you can go for it, you can shoot for the stars, keep your feet on the ground and shoot for the stars and that is the case in whatever activity you are, whether you are a student, whether you are an architect, a manufacturer, somebody in farming or somebody in the news business, nobody can hold you back. Don’t let nobody put limits on your own imagination and your capacity to do better,” Gonsalves said.

He said he was giving party supporters “the pathway for you to internalise and lay the basis as we go to the people and say a fifth term — five inna row”.