The Liming hotel opens in Bequia 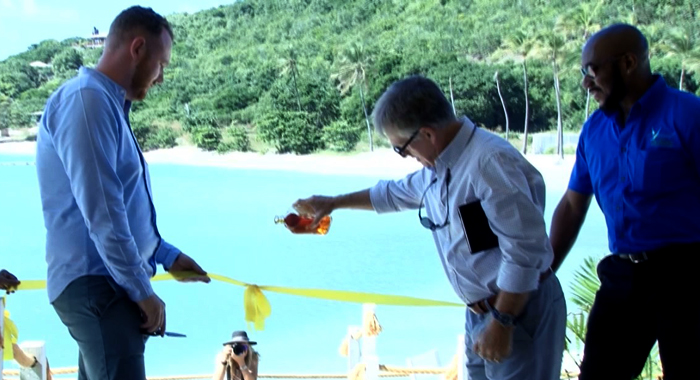 The Grenadine island of Bequia is home to one of the region’s newest luxury hotels, called The Liming.

The Liming is neatly tucked away in Adams Bay, Bequia and has transformed the entire area.

The official opening ceremony was held on

Dec. 10, and included a prayer by Pastor Dale Haynes of the Seventh-day Adventist Church.

One of the persons behind the Liming Hotel is businessman and hotel developer, Kelly Glass.

Glass said he is thrilled that the Hotel is finally opened, adding that he is “very proud to be opening a five-star product in Bequia… It‘s a fantastic island and I think this is a fantastic product.”

Glass introduced The Liming to the audience as a subsidiary of Inverlochy Castle Management and Consulting Company (ICMI).

Glass said ICMI run about 15 castles in Scotland and accolades and awards that they’ve been collecting over the years.

“So The Liming and ICMI stand for quality and for service,” Glass said.

He thanked and acknowledged the hard work of his kitchen staff as well as Deputy Director of Grenadines Affairs, Herman Belmar, who he said helped them out a lot with many requests and made “this thing happen”.

Glass also extended gratitude to the Hotel’s construction team, the St. Vincent and the Grenadines (SVG) Tourism Authority, and his business partner, Jonathan Milne, whom he referred to as the “person on top of the list” for his investments in Bequia.

CEO of the SVG Tourism Authority, Glen Beache, and some of his staff, were among the guests at the opening. Beache told the gathering that St. Vincent and the Grenadines, as a tourism destination, has come a long way and that he thinks the product that the country has to offer is very diverse.

Beache congratulated Glass and his team on what he termed an exceptional job.

He commended the staff for the great service, adding that he hoped “they keep it up”.

The ceremony concluded with a symbolic pouring of Captain Bligh rum on the ribbon prior to the cutting, which was done by the General Manager Lewis Scrimgeour.

2 replies on “The Liming hotel opens in Bequia”