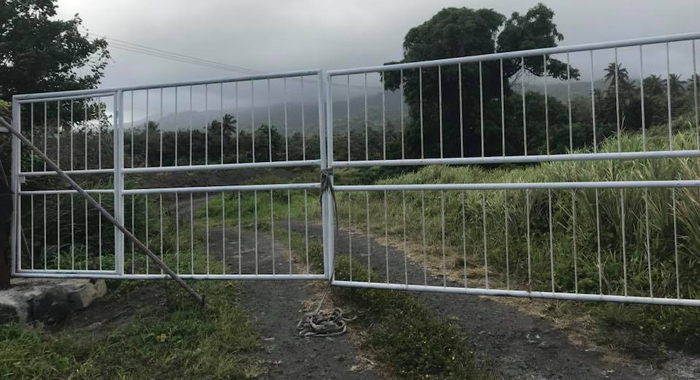 The gate at the entrance to the property that Leon “Bigger Bigs” Samuel owes in Rabacca. (Photo: Bigger Bigs/Facebook)

Six years after the government removed the gate at his Rabacca property, creating an unhindered thoroughfare for pedestrian and vehicular traffic, businessman Leon “Bigger Bigs” Samuel has reinstalled a gate there.

Samuel, who is manager of Bigger Trucking & Block Construction Co., told iWitness News on Tuesday, New Year’s Day, that while the gate was reinstalled on Dec. 5, 2018, it was always his intention to lock it on Dec. 31, 2018.

Samuel said that he went to the property at 8:30 p.m. on Old Year’s Day and locked the gate.

He said he went at that time because he did not think that any farmer or their vehicle would have been on their farms, located north of his lands, at that time.

“And I hope this will awaken their consciousness of the existing problem. Bad things won’t go away by pretending that they don’t exist. And I think this is what they have been doing for some time now. They have been pretending it doesn’t exist and hoping it will go away. But it will not go away.”

Bailey said the action was taken in accordance with the Roads Act, which gives the Chief Engineer authority over all public access roads in St. Vincent and the Grenadines.

Samuel had locked the gate to the property, even as farmers said there is a right of way there, which allows access to their lands.

But Samuel has maintained that the property and the road there are private, and had expressed concern about the security of the EC$1.5 million in equipment there, after the gate was removed.

In 2011, the government rescinded Samuel’s license to mine aggregate on lands he owns at Rabacca.

Samuel said that the government’s decision forced his business to close.

The closing resulted in the loss of employment of over 60 persons and millions in losses, Samuel has said.

He told iWitness News on Tuesday:

“It is our intention for this new year that we are going to resume work at Rabacca. And in the process of doing this, there are some outstanding matters that need to be addressed. And we know, our property has been used for some time now as a roadway and we cannot allow it to continue indefinitely,” Samuel told iWitness News.

“There is a law that if we allow it (access through the lands) to continue, then it will become a road. We have to protect ourselves and we are hoping that in the process of doing this, that the government will – because we have made several attempts to touch base with them or to touch base with the prime minister, but we failed to do so.”

He said that engineers, surveyors and residents of the area have said that there was never a public road through his property.

Samuel interpreted, as a similar admission, a statement made by Minister of Transport and Works, Senator Julian Francis in Parliament last February.

The minister had said:

“Bower mountain road, Mr. Speaker, you would recall years ago there was a talk that monies were allocated for a bridge at Bower. This was in the Bigger Biggs debacle and that the money was spent and the bridge never got built. But, Mr. Speaker, honestly, in my opinion, there is nothing to build the bride on. Is pure Rabacca sand in Bower. So we have to look at an alternative access for the farmers to get to Bower rather than using and building that present access that we have.”

Samuel said that for years his company has just wanted to establish that there is no road through the lands at Bower, but it was willing to allow access, based on terms.

“A proper structure and a document has to be drawn up and you pay … a peppercorn rent or lease or whatever so that it would be clear to everybody that there is not a road there but we allow the access so that anytime the government finds the alternative place to build a road for those persons above of us…. We cannot allow a road through the middle of our property like that.”

Samuel told iWitness News he expects resistance from the government but is resolute in his intention.

“This time, I am willing to take this to the end… I am not going to stop this time until I get what I want. What I want is the restoration of my business.

“If they go and tear off the road now, it will be a horse of a different colour from here on. This time, what we are pushing for is the restoration of our business by the government. This is where it ends.”