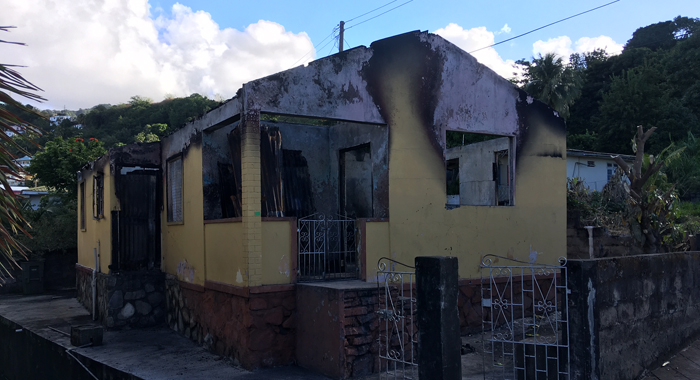 The shell of the burnt-out house in Paul’s Avenue. (iWN photo)

Paul Avenue residents Winston Burnette, 41, and his girlfriend, 31-year-old Simone Batson, were so busy over the holidays that they did not have time to celebrate Christmas.

They had decided that they would save their festivities for the New Year holiday.

Their rented home, a four-bedroom house in Paul Avenue, belonging to businessman Leroy “Fly” Edwards was yet to be decorated for the season.

But three days before the New Year’s holiday, the couple would have their hopes dashed as fire destroyed the contents of the concrete house.

“I was at work.  I worked at the Sanitation Department. I get to work for 4 a.m. because of the Nine Morning and Christmas. My girlfriend goes to work for about 6 but she has to be there for about 5:45 a.m. She works at the public library,” he told iWitness News.

He said he left home for work around 3:45 a.m. and had already moved from Bottom Town to the Market but returned home to check on his girlfriend, since she had not passed around 5:30 a.m., as is normally the case.

Burnette told iWitness News that when he went back home, his girlfriend was just about ready and passed about 5 to 10 minutes later.

He said that in the meantime, he had cleaned the area near Lyric Building and had gotten as far as Layne’s when he got a call from his girlfriend saying she had just gotten to work and someone told her the house was on fire.

“From there, I started running. I just dropped my tools and started running. When I got by the vegetable market, I saw a fireman running too. So we kind of end up running together, so I said, ‘Officer, somebody tell me my house is on fire.’”

Burnette told iWitness News that the officer told him that he had seen the smoke and was going to investigate.

“When I hit by the car park coming in there, I saw the house; it was up in smoke blazing,” he told iWitness news, referring to a car park yards away from the house in Paul’s Avenue.

“We lost everything. All we had was my uniform on my back, her uniform on her back. That was it. It took everything from us.”

He told iWitness News that the house had an electricity connection and they did not use candles.

Police say that they are treating the fire as an act of arson.

“I have been living here for three years. She (girlfriend) is originally from Paul’s Lot; I’m from Block 2000. Through the years, I have been passing though here, I know a lot of people through here. I don’t think I have any enemies. I won’t want to say that but the police say they are investigating because where the fire started was basically in the middle of the living room so they say they want to check and see.

“They asked me that same question, if I think anyone would want to hurt me or anything like that but I can’t say that.”

Since the fire, Burnette and his girlfriend have been living in a room on the upper floor of his mother-in-law’s recently-renovated house, also located in Paul’s Avenue.

He said they have been told that they can stay there until they sort themselves out.

“I have some stuff I need to do. I have to go by the station and make a report today. We have some stuff [hire purchased] from Singer not even three months good, so we need to see how that goes. I can’t even collect my salary. I don’t have an ID card, my licence burned. Everything burned, my money — everything.”

Burnette said the he was doing “ok” but was concerned about his girlfriend.

“She is who I am worried about because for the last two days she was crying. We didn’t do anything for Christmas… Work was too much or us so we said we would do something for the New Year. But we didn’t get through to do that. But we are here for now. We have life. God is good and we are just trying to make a new start for the New Year.”

He said that they have been able to secure some clothing but are in need of food, especially canned food since they do not have any appliances with which to prepare a meal.

Burnette said that even a kettle would be a great help as he has to go off to work early in the morning, and cannot even make himself a cup of coffee.