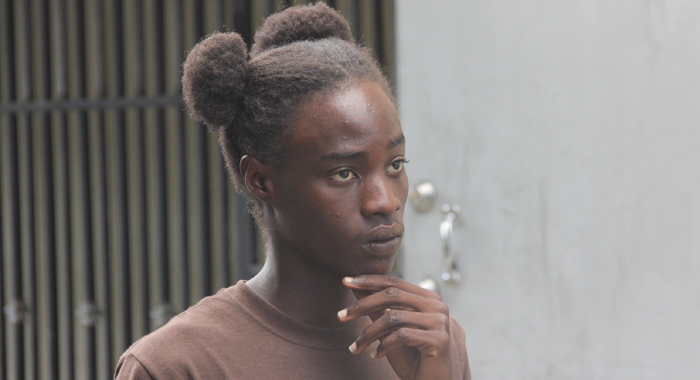 A contemplative Jahvil Browne outside the Serious Offences Court on Thursday. (iWN photo)

“You are now a walking prison.”

Those were the words that lawyer Ronald “Ronnie” Marks used outside the Serious Offences Court in Kingstown on Thursday to explain the implications of the three-year suspended prison sentence that Chief Magistrate Rechanne Browne had just handed down.

He urged his client, Jahvil Browne, 18, of Lowmans Hill, to settle down and ensure that he stays out of trouble, noting that if the youth is convicted of a crime within the three-year period, he would go straight to jail.

The chief magistrate handed down the suspended prison sentence after the prosecution withdrew gun and ammunition possession charges against his co-accused and settled for the guilty plea that the teen had entered at his arraignment on Sept. 24, 2018.

Browne was charged along with his sister, Melissa Soleyn and his stepfather, Gilbert James, that on Sept. 22, 2018, at Lowmans Hill, they had in their possession one .32 revolver, serial number unknown, without a licence issued under the Firearms Act.

They were charged with possession of component parts of a .38 revolver, serial number 529248, two rounds of .32 ammunition and one round of .22 ammunition.

His co-accused had pleaded not guilty to the charges, but the prosecution decided to proceed against all three accused.

However, on Thursday, Jan. 3, 2018, Senior Prosecutor Adolphus Delplesche withdrew the charges against Soleyn and James after hearing the evidence of the ballistic expert, Sergeant Julian Cain, and the investigator, detective Corporal Philbert Chambers.

The prosecutor also withdrew the ammunition possession charges against the youth.

In mitigation, Marks told the court, that while his client’s offences are serious, he is 18 years old and had never before been in trouble with the law.

He told the court that the youth attended the Buccament Bay Secondary School, which he left at Form 2 to take up employment to assist his family.

He said that Browne had admitted to the offence but had maintained that he was “strenuously encouraged by the police to do so”.

The lawyer said that had it not been for his client’s admission, neither he nor anyone of the co-accused would have been before the court.

Marks asked the court to give strong weight to the mitigating factors regarding the offender.

Regarding the offence, the lawyer said the component parts of the .38 revolver were not in a lethal form, adding that this was also the case with the .32 revolver.

He noted that the firearm was unloaded and is of relatively small calibre.

Marks pointed out that the ballistics expert had said that the firearm has a little rust.

The lawyer suggested that the expert had understated the condition of the weapon.

“That description can’t be supported by evidence. We see the condition of that weapon,” he said, adding that he had to take the expert’s word that the weapon is functional.

“I don’t think anyone wants to take the risk to test fire that weapon,” he told the court.

He said the condition of the weapon supports his client’s explanation that he had found them along a riverside.

The lawyer noted the Court of Appeal’s stance on firearm offences — that the court should start with a custodial sentence.

He, however, noted that the appeal court also encouraged avoiding sending young offenders to prisons.

Marks said that while Browne was yet to start a family, he was employed as a construction worker and was assisting in supporting his home.

In his submission, Delplesche said that as prosecutor, he was interested in the rehabilitation of the youth.

He said Browne might have been naive in taking home the weapons after finding them.
The prosecutor said he was not looking for a custodial sentence for the youth, adding that he also did not think that the teen is one of those persons who should be fined.

Delplesche said he was looking for a suspended sentence to give the teen “an opportunity to prove himself.

“Let him know something is there and give him that opportunity to prove himself,” he told the court.

Before handing down the sentence, the chief magistrate noted that the teen had pleaded guilty at the first opportunity and had spent almost a month in jail before securing bail.

She noted that he is young, adding that during youth some people tend to do things that they regret later in life.

She noted the stance of the Court of Appeal on firearm matters, in that a custodial sentence should be the starting point, but equally, that young people should be given a chance at rehabilitation.

She said she found no aggravating factors in the case, adding that the mitigating factors were the teen’s lack of criminal history, and his early guilty plea.

She, however, said that she did not want him to think that the offence was not a serious one.

“The onus is on you to take the opportunity given,” she said after saying that she would not impose an immediate prison term or a fine.

She then sentenced the man to three years in prison on each count.

The sentences were suspended for three years.

“I am giving you a chance to transition into your 21st birthday to prove yourself,” he said.

One reply on “Suspended sentence puts teen in ‘walking prison’”