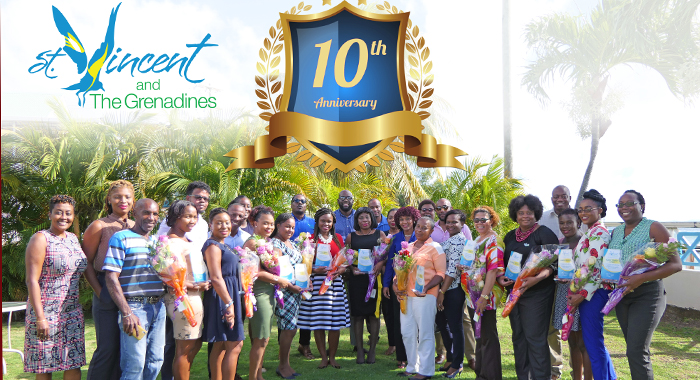 The St. Vincent and the Grenadines Tourism Authority (SVGTA) celebrated its 10th year of operations on Wednesday.

The Authority, which commenced operations on Jan. 2, 2009, is the agency entrusted with direct responsibility for promoting the country as a tourist destination.

In addition to its primary role of destination marketing and promotion, the Tourism Authority is also responsible for developing standards and regulating the quality of tourism services provided by local industry operators.

The initial staff complement of the Authority was 16 — all former staff of the Ministry of Tourism who were formally transferred to the Authority — five in the overseas offices and 11 in the head office.

The staff complement has expanded over the last 10 years to ensure the charge of the authority is adequately and efficiently executed. Currently, the SVGTA has a total complement of 33 persons in its employ.

At a luncheon and recognition ceremony on Wednesday, Chief Executive Officer of the Authority, Glen Beache, thanked the initial team based in the head office for their hard work and dedication.

The five overseas-based  staff are Gracita Wilson-Allert, Barbara Mercury, Eleen Ackie, Celia Ross-Latham and Shelley John, who are based in the SVGTA’s London, New York and Toronto offices.

The CEO also commended the entire staff for the achievements of the authority since it commenced operations.

The accomplishments of the authority include the implementation and monitoring of tourism service standards and securing chartered and scheduled flights from international carriers to the Argyle International Airport.

Several activities will be held during 2019 to commemorate this milestone of the SVGTA, including a strategic planning meeting, which will bring together staff from the head office and the authority’s overseas Offices, as well as key tourism stakeholders.