Senator disagrees with PM, says PSC should be removed 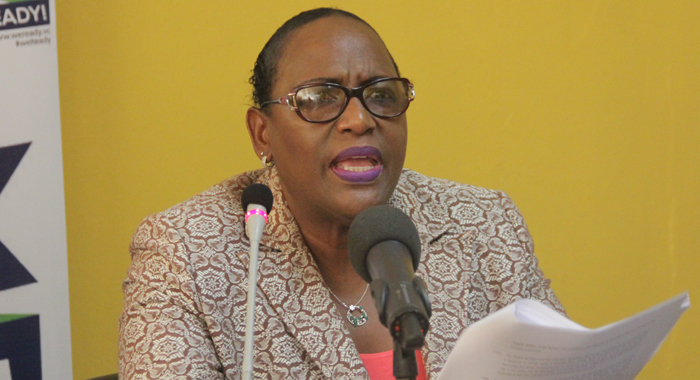 An opposition lawmaker disagrees with Prime Minister Ralph Gonsalves that the public service commissioners cannot be removed because of the court ruling that they broke the rules when they overlooked five public servants for promotion.

Speaking at a press conference of her New Democratic Party in Kingstown on Monday, Kay Bacchus-Baptiste, who, like Gonsalves, is a lawyer, referred to Section 77 of the Constitution.

“In fact, he fell short of even commending the board of the civil service commission.”

The Public Service Union (PSU) has won a case it brought against the Public Service Commission (PSC) challenging its failure to promote five public servants, one of whom has remained stagnant in the service for 28 years, notwithstanding his improved academic qualification and the advancements of his trainees.

Bacchus-Baptiste noted that the PSC, according to the Constitution, is appointed by the Governor General, acting on the advice of the prime minister.

“So this Public Service Commission is his baby, the prime minister’s baby,” she said, but noted the proviso to consult with the Civil Service Association and, in relation to appointing “not less than one nor more than three other members” of the PSC, to consult with the Leader of the Opposition.

“We know how Dr. Gonsalves does his consultation,” Bacchus-Baptiste said.

She further noted that the Constitution says “A member of the Commission may be removed from office only for inability to exercise the functions of his office (whether arising from infirmity of body or mind or any other cause) or for misbehaviour and shall both be so removed except in accordance with the provision of this section.”

Gonsalves has cited that section of the Constitution in explaining why the members of the PSC — who were reappointed last November for another two-year term, while the judgment was pending — cannot be removed.

“I can think of no greater action of misbehaviour by this present commission. When we look at the judgment, I don’t see how they can escape that conclusion,” she said.

The opposition lawmaker said the judgment “is a damning indictment on the absolute failure of the ULP government to ensure fairness and transparency and meritocracy in relation to the promotion of civil servants.

“It cannot be said in any other way. In fact, I think I am being gentle to put it that way.”

She noted that in the judgment, Justice Esco Henry quoted another case which said:

“Promotion provides a positive incentive and stimulus to an employee to aspire to greater heights in his chosen field. When it fails to materialise, it leads to apathy, frustration, demotivation, dissatisfaction, low morale and dysfunctionalism. This is particularly so when juniors are pitch-forked over their seniors without being given any reason for such action.

Officers who are repeatedly overlooked for promotion develop a sense of rejection and become demotivated. Moreover, it would be unreasonable, in the absence of reasons, for those bypassed for promotion to conclude that promotion is based not on merit but on some other factor.’

Bacchus-Baptiste said that quotation “can apply verbatim to St. Vincent and the Grenadines.

“When you have more than half your civil service demotivated, dissatisfied, leading to dysfunctionalism, we can say that the ULP has failed us, the citizens of St. Vincent and the Grenadines. And, based on this judgment, I am calling for not just for the resignation of the public service commission but for the prime minister to exercise his authority under the constitution and have the commission removed.”

She said that based on the case cited by the judge, “it would be not be unreasonable in the absence of reasons for those bypassed for promotions to conclude that promotion is not based on merit but on some other factor.

“All of us in St. Vincent and the Grenadines know what those other factors are. You don’t support them, you would not kowtow to them and you would not get appointment.”

The senator said she does not make lightly her call for the PSC to be removed.

Citing the affidavit by Cecil “Blazer” Williams, chair of the PSC, Bacchus-Baptiste noted that he told the court he is “very familiar” with the Public Service Regulations and claimed persons seeking to bring an action, as the claimant has proceeded to do, must do so with the requisite permission under the Civil Service Orders Rule 3.19.

“So he is au fait with it to try to stop the persons who brought his action to court by saying that they need to get permission from the civil service but, by analogy, it means that he is au fait with the entire Public Service Regulations,” she said.

The court had earlier ruled that the public servants did not need the permission of the PSC to sue the PSC, thereby allowing the case to go to trial.

She said she did not want persons to get the impression that the commissioners’ appointment “is made in stone and they cannot be removed.

“They ought to be removed. It’s one thing to call upon the officers to resign, which they ought to do, to my mind, based on this case, but the prime minister owes the citizens of St. Vincent and the Grenadines a duty to remove that commission and to appoint persons — not somebody else who will fit into the same skin, goat skin, that these were doing but to appoint persons who can perform as the constitution calls them to do.”

2 replies on “Senator disagrees with PM, says PSC should be removed”