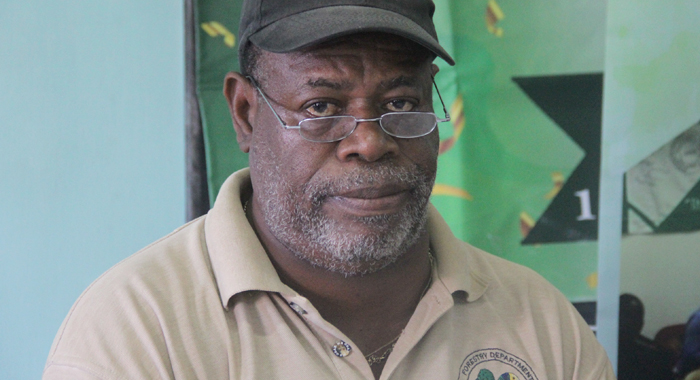 Joel Poyer spoke at the press conference 28 years to the day that he received his last promotion. (iWN photo)

A public servant who was overlooked for promotion for 28 years — across two administrations — has blamed spitefulness among his co-workers and political victimisation for his lack of progress.

High Court judge Justice Esco Henry found that the PSC has failed to observe principles of fairness, transparency and objectivity in exercising its function under Regulation 19 of the Public Service Regulations in respect of promotion of the five officers.

Poyer joined the service in 1984 and was appointed formally in 1991 as a forestry officer, equivalent to FO3.

At the time of joining the service, he was trained in agricultural science at the St. Vincent Technical College.

During his time in the service, he went on to obtain a degree and other qualifications and training, but looked on as his juniors, some of whom he had trained, were promoted while he remained in the same post.

He worked under the New Democratic Party (NDP) administration, which was in office from 1984 to March 2001, and the Unity Labour Party government, which has been in office since.

Poyer said that under the NDP administration, the failure to promote him “was not political, but it was done by internal victimisation [by] my work colleagues”.

He said he would challenge his co-workers on certain things because he is an outspoken person and one of the ways they got back at him was by not forwarding his name for promotion.

“So they used that as a punishment.”

Poyer said that the same criteria have existed, under the NDP and ULP administrations, for the PSC to consider when making promotion.

Asked what evidence he had to support his allegation of political victimisation under the ULP administration, Poyer said that he personally took letters to the head of the PSC, lawyer Cecil “Blazer” Williams regarding its promotion policy.

“And when the matter came up in court, he said he never received anything,” Poyer said of Williams.

“Well, it’s just a gut feeling I have based on what has transpired. Because of my operation within the union, I stand up for workers’ rights and defend workers and from documents that were sent forward from my department, where the seniority list was changed.”

He said that when the document left his department, his name was on the seniority list, but between the permanent secretary and PSC, his name would no longer be there.

Meanwhile, Elroy Boucher, head of the PSU, who also testified in the case, said that most of the evidence that he has seen is under the ULP administration.

“And perhaps so because I came onto the scene pretty late with respect to trade union issues. So I could only judge based on that particular time,” the PSU leader said.

He said he became active in trade unionism from 1998.

“So I cannot feel what transpired under the previous NDP administration. What I know for a fact [is that] I have heard senior public officers, many of whom have retired, have said to me — a lot of complaints came from them — back in their time, seniority was the key, particular as it relates to administrative posts. People did not even make noise for promotion because they know that they were not the next person in line. So they were awaiting their turn.”

Boucher said he moved in 1998 from teaching into the Ministry of Health and has not been promoted since.