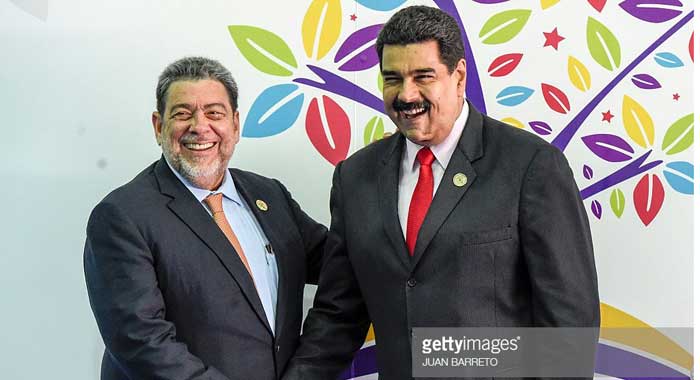 The government of St. Vincent and the Grenadines on Thursday says it has “a deep sense of unease and apprehension” about recent developments in Venezuela, including the marches sponsored by opposing political forces the previous day in Caracas, which “can promote civil unrest within the country”.

Kingstown said in a statement that it is “dismayed at the provocative actions by the National Assembly President, Mr. Juan Guaido, which serves to destabilise severely order and the rule of law” within Venezuela.

“Further, the act by several governments within the hemisphere to recognise Juan Guaido as Interim President of Venezuela goes against the fundamental principle of non-interference into the internal affairs of a sovereign state which is established within the Organization of American States (OAS) Charter, the Inter-American Democratic Charter and the United Nations Charter,” the statement said.

Major regional players Brazil, Colombia, Chile, Peru and Argentina all gave their backing to Guaido’s self-proclamation as Venezuela’s acting president, which he made in front of crowd of tens of thousands of supporters in Caracas, the international media outlet said.

The EU stopped short of explicitly supporting Guaidó but called for elections in Venezuela and backed the national assembly that he heads as the “elected institution whose powers need to be restored and respected”.

On Thursday, SVG reaffirmed its recognition of Maduro as the constitutionally elected president of Venezuela and his inaugurated for a second term on Jan. 10.

“In order to maintain the democratic fabric of the Venezuelan society, the Government of St. Vincent and the Grenadines urges both the Government and Parliamentary opposition to engage in meaningful dialogue inclusive of civil society and the business community without recourse to any action which can further erode the rule of law and lead to violence and civil unrest.

“The Government of St. Vincent and the Grenadines calls on all Member States of the OAS to respect the sovereignty of the Bolivarian Republic of Venezuela, the legitimacy and legality of its government headed by President Maduro, and to promote an environment of peace and dialogue with a view to maintaining regional and hemispheric order for the peaceful co-existence among states.

“The Government of St. Vincent and the Grenadines remains fully supportive of efforts to resolve through peaceful means, the current challenges and problems in Venezuela. The engendering of violence will not aid any necessary and desirable political solution. We call on all parties to accord full respect to the rule of law, inclusive of the promotion of peace, order, and good governance,” the statements said.

After the talks, the regional bloc said it heads of government “are following closely the current unsatisfactory situation” in Venezuela, which the statement noted is a neighbouring Caribbean country.

A statement said that the heads of government “expressed grave concern about the plight of the people of Venezuela and the increasing volatility of the situation brought about by recent developments which could lead to further violence, confrontation, breakdown of law and order and greater suffering for the people of the country”.

The regional leaders “reaffirmed their guiding principles of non-interference and non-intervention in the affairs of states, respect for sovereignty, adherence to the rule of law, and respect for human rights and democracy”.

They also “reiterated that the long-standing political crisis, which has been exacerbated by recent events, can only be resolved peacefully through meaningful dialogue and diplomacy.

“In this regard, Heads of Government offered their good offices to facilitate dialogue among all parties to resolve the deepening crisis.”

“Reaffirming their commitment to the tenets of Article 2 (4) of the United Nations Charter which calls for Members States to refrain from the threat or the use of force and Article 21 of the Charter of the Organization of American States which refers to territorial inviolability, the Heads of Government emphasized the importance of the Caribbean remaining a Zone of Peace.

“Heads of Government called on external forces to refrain from doing anything to destabilize the situation and underscored the need to step back from the brink and called on all actors, internal and external, to avoid actions which would escalate an already explosive situation to the detriment of the people of Bolivarian Republic of Venezuela and which could have far-reaching negative consequences for the wider region.

“Heads of Government agreed that the Chairman of Conference, Dr the Honourable Timothy Harris, Prime Minister of St. Kitts and Nevis would seek an urgent meeting with the United Nations Secretary-General to request the U.N’s assistance in resolving the issue.”