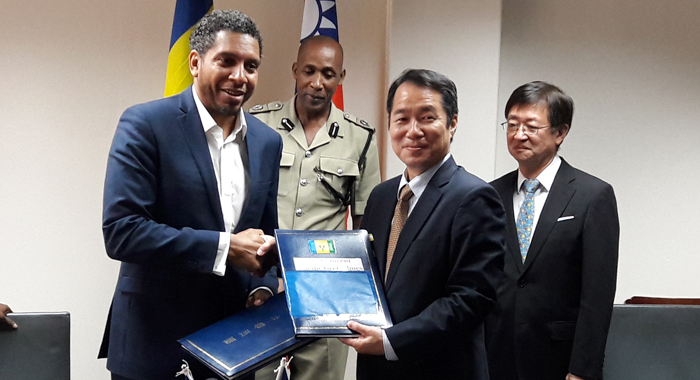 The government of St. Vincent and the Grenadines (SVG) and Taiwan, on Friday, signed an agreement for a US$2.4 million Intelligent Bus Management and Monitoring System Project.

The Intelligent Bus Information System is expected to give commuters more control over the routes and schedules, and help them to know how long before a bus arrives.

The other component of the project, the Intelligent Video Surveillance System, aims to ensure a safe environment for both residents and visitors.

With the video captured by the system, police officers may efficiently investigate crime and preserve evidence, a facility which is expected to deter criminals and significantly reduce the crime rate.

Taiwan ambassador to SVG, Calvin Ho signed on behalf of Taipei, while SVG’s Minister of Finance, Economic Planning, Sustainable Development and Information Technology, Camillo Gonsalves, signed on his government’s behalf, at the ceremony in Kingstown.

Ho said that the signing means that the preparations for the project are almost complete.

He said the project aims to provide better public service through a more convenient and safer environment.

A task force of the ministries of Finance and Transport, stakeholders and Taiwan information communication technology experts cooperated to establish a video surveillance system with more than 200 cameras on electricity poles, especially in high-traffic areas in St Vincent.

He said that the system will have a control room at Central Police Station.

All of the instruments will be installed between 2019 and 2021, the diplomat said, adding that by the end of the project, all of the mechanisms will function effectively.

The project includes more than 300 hours of training and maintenance assistance because Taiwan want the system to be sustainable and run very smoothly when it is  handed over to the Vincentian counterparts, Ho said.

The ambassador said he believes that the friendship between both countries will be further strengthened through the project and that it will be a benefit to all the people of SVG.

Meanwhile, Gonsalves noted that the new project comes at the end of the previous one — Electronic Document Management System (EDMS) –that Taiwan handed over to St. Vincent about three months ago.

The minister said that with that project completed, he thought it would be a good idea to implement a project that is more tangible.

Gonsalves said he thought it would be good to leverage Taiwan expertise and experience in a way that people could touch.

The minister said two of the things that were and are topical is the chaotic –privately-owned — public transport service and expanding the police surveillance to deter and solve crime.

He said that the project will bring reliability and predictability to the bus service and provide the police and the Ministry of Transport and Works with information about usage patterns.

The e-bus project, in its most basic sense, is placing a small transmitter on the bus that would provide information on where the buses are, where they are going, and where they are coming from.

Intelligent bus stops will be fitted with CCTV camera and, in some cases, free wifi, and will provide persons with information about approaching buses and where those buses are going.

An app will tell commuters where a particular bus is at a particular time, in addition to data about routes and anticipated schedule.

He said that the school buses donated by Taiwan and those contracted by the government will be fitted with the transmitters as a matter of course.

Other bus operators have already seen the potential benefits from a competition and service perspective and have indicated interest, Gonsalves said.

He said that the authorities will review the data and this information will be important for urban planning and addressing gaps in the bus service.

The second component of the project — the Intelligent Video Surveillance System –involves the installation of CCTV in SVG.

Cameras will also be deployed in Kingstown and the windward and leeward sides of St. Vincent at high traffic areas and areas identified by RSVGPF as requiring surveillance.

He said that a potential high crime area is not the only criterion, adding that cameras are useful in areas prone to natural disaster and where vulnerable infrastructure, such as bridges, are located.

Gonsalves said he hopes that the system will be a crime deterrent in addition to giving security to commuters and pedestrians.

While 200 cameras will be deployed, it does not mean that it will be installed at 200 locations, as some locations require multiple cameras.

“We think this CCTV rollout will be critical to emphasising the government’s commitment and determination to fight crime, to prevent crime and to ensure a feeling and safety and security in the Vincentian population and we are extremely grateful to the government and people of Taiwan in this regard,” Gonsalves said.

He said the government is investing heavily in crime-prevention and fighting and social intervention to prevent at-risk persons from getting involved in criminal activity.