Gonsalves denies conflict of interest in dealings with Venezuela 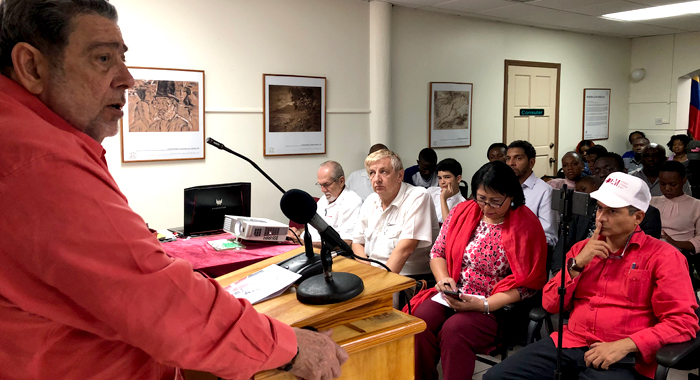 A Canada-based Vincentian activist has accused Prime Minister Ralph Gonsalves of having a personal conflict of interest in his government’s dealing with the government of Venezuela.

Marlon Bute, a former Unity Labour Party (ULP) member who broke ranks with the party a decade ago after he migrated to Canada, levelled the accusation in a call to Boom FM last Thursday when Gonsalves was the in-studio guest.

Last Thursday, St. Vincent and the Grenadines and two other CARICOM nations — Dominica, and Suriname — voted against a U.S.-sponsored resolution challenging the legitimacy of Nicolas Maduro’s second term in office.

Jamaica, St Lucia, Haiti, Bahamas, and Guyana, along with 14 other OAS members, voted for the resolution.

Trinidad and Tobago, St Kitts and Nevis, Antigua and Barbuda, Barbados, and Belize abstained from the vote, which saw the resolution defeated after 16 of the 34 members of the OAS voted against the resolution and 18 rejected it.

Kingstown said on Thursday it has “a deep sense of unease and apprehension” about recent developments in Venezuela, including the marches sponsored by opposing political forces the previous day in Caracas, which “can promote civil unrest within the country”.

Gonsalves has said his government is taking a principled stance, including consideration of international law, against interference in the internal affairs of Venezuela.

But Bute, in his conversation with Gonsalves, questioned his government’s motivation.

“The fact is that your interests are aligned to Maduro and Venezuela and that’s why, in my estimation, that you cannot vote otherwise because to vote for a resolution that would hasten the departure of Maduro will also hasten your departure,” Bute told the prime minister.

“I have articulated on a number of occasions that there is a three-tiered relationship with you and the Venezuela regime: one, the Gonsalves family allegedly has a property in Cane Garden that is leased to the Venezuelan government; two, party-to-party relationship where there is a resource and other support for your party from Maduro’s party; and, three hundreds of millions of dollars in PetroCaribe funds that we have not received any audits of.”

Gonsalves, however, said that Bute was “talking foolishness”.

Bute, however, maintained that Gonsalves was acting in his own interest and not the interest of the Vincentians in SVG and those who live outside of the country.

The prime minister accused Bute of being absolutely dishonest, saying that the account has been given on the PetroCaribe funds.

“Go and look at the companies’ registry and you will see the account there for — the last account I think is for 2016 or 2017, audited, and the Director of Audit is supervising the last audit.”

Regarding the lease allegation, Gonsalves said:

“It is true that a property owned by my wife is rented by the [Venezuelan ambassador]. That is a public thing. There is a property where the embassy is – is owned by a prominent person in the NDP.”

The prime minister said that when a country abstains from voting on a resolution, this means that the country does not agree with it.

But the host of the programme, Dwight “Bing” Joseph, told the prime minister that that is not necessarily the case.

Gonsalves, however, said that abstaining means that a country does not agree and had a country agreed, it would have voted no.

The host said if the country disagreed they would have voted no.

“No, there might be reasons why you may not vote no. So I am saying that only five of the 14 CARICOM countries voted with the United States of America and that’s a fact,” the prime minister said.