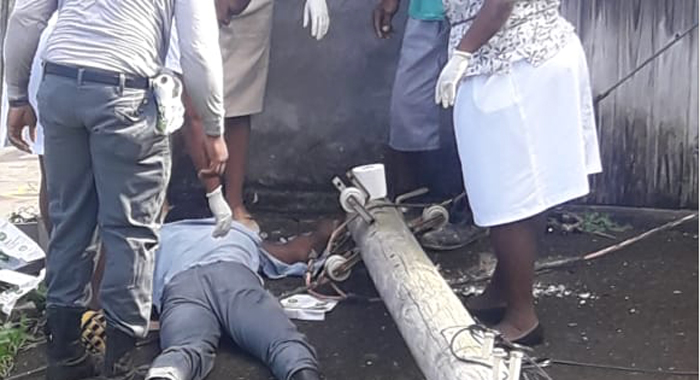 A utility worker who injured both of his arms when a 35-foot, low-voltage electricity pole broke with him on it on Dec. 10, returned to Fancy on Monday to thank the community for their love and support.

Adà France, of Cedars, a linesman with St. Vincent Electricity Services Ltd. (VINLEC), was knocked unconscious when the utility pole, which appeared to be rotten at the root, came crashing down with him.

“It was only God that could have saved me,” France told the principal, staff and students of the Fancy Government School at their weekly assembly on Monday, during which he was presented with a get-well-soon card.

France was working on the pole on the school compound when the incident occurred.

He told the school’s population on Monday, that he had returned to thank them for their love, prayers and support.

The injured man, whose arms are still in braces as he recuperates, said he also wanted to give assurance to those persons who had witnessed the incident that he was progressing well.

He told his audience that they should live for God.

France also visited the Fancy Health Centre, where he was taken immediately after the incident and thanked the healthcare workers for their assistance.

He was also treated abroad for his injuries.

“The month I spent in the hospital, the doctors marvelled at my progress and I pray to God each day that I will be a living testimony of him, that men may see his good works and that they should believe in him and glorify him,” France later told iWitness News.

“I love what I did for a living and I would go back to what I was doing if God wants me to continue being there.

“This incident didn’t bring any fear in me, all that it did was made me fear God. This accident has helped make me realise that I have to serve him, and that God is good and worthy to be praised.”