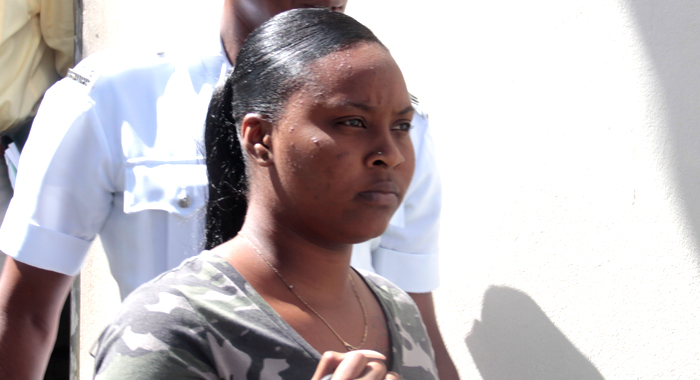 The accused, Suranie Graham leaves the Serious Offences Court after her arraignment on Monday. (iWN photo)

A 20-year-old businesswoman of Lowmans Windward was, on Monday, granted EC$20,000 bail on three cocaine-related charges.

Suranie Graham was brought before the Serious Offences Court charged that on Saturday, Jan. 26, in Kingstown, she had in her possession 1,025 (2.2lbs) of cocaine with intent to supply it to another.
She was further charged that, on the same date, she had the cocaine for the purpose of drug trafficking.

The woman was also charged with importing the drug.

She pleaded not guilty to all three charges.

As part of the bail condition, Chief Magistrate Rechanne Browne also ordered the woman to provide one surety and to report to the Biabou Police Station on Mondays from 6 a.m. to 6 p.m.

Graham was placed under a 7 p.m. to 6 a.m. curfew and was also ordered to surrender her travel documents to the court.

The chief magistrate also ordered that stop notices be placed at ports of entry and exit and ordered the woman to seek the permission of the court to leave the country.

The matter was adjourned to March 15.

One reply on “Woman, 20, on cocaine charges”