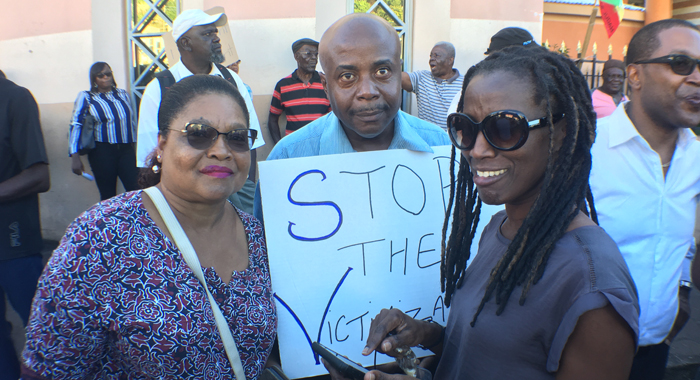 Former teacher Addison “Bash” Thomas, centre, one of the three teachers on whose behalf the union filed the lawsuit, and Shirlan “Zita” Barnwell, one of the union’s lawyers on the picket line on Tuesday. (iWN photo)

Former teacher Addison “Bash” Thomas was on Tuesday “overjoyed” with the court ruling that he and his colleagues should have been granted election leave to contest the 2010 general election.

“At this time, I am elated, I am overjoyed. It has been nine years of suffering, nine years of hardship but today is a victory not only for me, Johnson, Daniel, but it is a victory for teachers and the teachers’ union of St. Vincent and the Grenadines,” Thomas told iWitness News.

He was speaking in Kingstown amidst protestors from the St. Vincent and the Grenadines Teachers’ Union and the Public Service Union, who called out their executives to picket as Minister of Finance, Camillo Gonsalves presented the 2019 Estimates of Income and Expenditure to Parliament.

The picket continues Monday, when the Budget will be presented, and is intended to bring attention to a number of issues affecting public sector workers, the unions say.

Thomas, along with Kenroy Johnson and Elvis Daniel, say they were forced to resign their job to contest the general elections on behalf of the main opposition New Democratic Party in 2010.
They had thought that they would get six-months no-pay election leave under the collective agreement that Prime Minister Ralph Gonsalves had singed with the teachers’ union in 2005.

However, when the teachers applied for election leave, the Service Commissions Department pointed them to the Constitution.

And, with Nomination Day approaching, the teacher decided to resign their post and contest the vote.

The union has denied this.

Neither of them were elected to Parliament and were not rehired to the teaching service.

The teachers’ union took the matter to court, but Justice Brian Cottle threw out the case, saying it was hopeless.

However, the Court of Appeal ruled on Tuesday that Justice Cottle erred in his decision.

It further said that the election leave article of the collective bargaining agreement was not unconstitutional and that the teachers — each of which had more than 30 years service — must be paid their pensions.

“We are victorious and w must celebrate. It is a victory!” Thomas told iWitness News.

He noted that the Court of Appeal had said that the election leave article was not unconstitutional and, therefore, not aspirational either.

“It is reality,” Thomas further said, adding, “So we have got to celebrate that.”

Thomas noted that the Appeal Court decision comes on the heels of the ruling of the High Court against the Public Service Commission (PSC) in favour of the PSU.

In that case, the court held that the PSC has broken the rules regarding the promotion of public officer.

“It’s an insult and it’s embarrassing for the government of St. Vincent and the Grenadines who proclaim that it is a labour government and using the Constitution against us, teachers, poor black people,” Thomas told iWitness News.

He said that while he had not seen the judgment, he had heard that it said they should receive their pensions.

“It is good news. It is good news. And it says a lot for teachers going forward, seeing that the judgment here is constitutional, teacher here who want to contest general elections can do so, apply for election leave, as long as it is in the collective agreement.