Children look on as man is stabbed to death 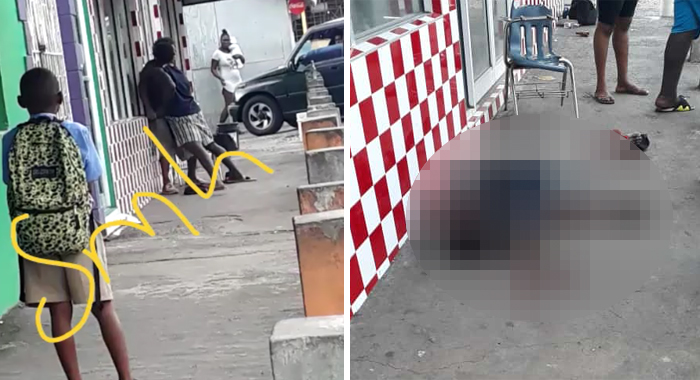 A primary school student looks on at the stabbing incident in Arnos Vale on Wednesday.

Primary school students on their way home from school and other members of the public looked on as a man was stabbed to death in Arnos Vale around 4:30 p.m. on Wednesday.

Another person filmed the killing and circulated a video of it via social media.

The body of one of the men goes limp and he falls to the ground and the other walks away holding what appears to be a cutlass.

“That is wha’ he been want,” a woman comments after the man falls to the ground.

The incident occurred at the gap to the Arnos Vale Sports Complex, and right outside the door of a church in the area.

Police said on Thursday that they are treating the incident as a homicide.

They have identified the dead man as Ricky Andrews a 47-year old labourer, of Arnos Vale

The police bulletin said that Andrews succumbed to injuries he sustained following an alleged altercation with another labourer, also of Arnos Vale.

Police did not disclose the identity of the other man.

They however, said that he is 57 years old and is in custody assisting them with their investigation.

The District Medical Officer pronounced Andrews dead at the scene.

Wednesday’s killing is the second in St. Vincent and the Grenadines for 2019.

Both killings have occurred in Arnos Vale, just hundreds of yards away from each other.