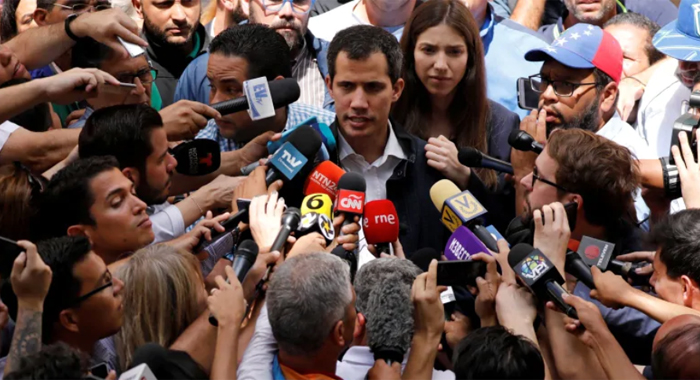 Venezuelan opposition leader and self-proclaimed interim president Juan Guaido, accompanied by his wife Fabiana Rosales, speaks to the media after mass at a local church in Caracas on Sunday. (Carlos Barria/Reuters)

Former Prime Minister of St. Vincent and the Grenadines Sir James Mitchell says that Kingstown should support the opposition in Venezuela, where Juan Guaidó, president of the National Assembly, has declared himself the nation’s president.

“Our position here, whether we stand up with the United States, or we stand aside, our choice will be known historically,” the retired politician said on Boom FM on Wednesday.

“In my view, we have a lot of debt with Venezuela and we should bear in mind, if there is a change of government, the first thing we should be doing is lobbying to make sure we get rid of all the debts and get our debts from Venezuela written off,” he said.

“So if you do not stand up for somebody when they are suffering and they are depressed, then don’t expect that they will be kind towards you when they come into their kingdom,” Sir James further told listeners.

The former prime minister said that in supporting the US position and calling for fresh elections in Venezuela, he is showing his own consistency

“My record is clear.  Remember I did not hesitate when there was confusion in St. Vincent to send the people back to the polls. So I am totally consistent. There is a problem like this in Venezuela, they should go to the polls and have it properly organised,” Sir James said, referring to the political unrest of 2000 during which he decided to call early elections.

Guaidó had received support from a number of international and regional capitals, including Washington, Bogota, and Brasilia.

However, SVG, and a number of other Caribbean and other nations, including Russia and China, has opposed the development and have called for non-interference in Venezuela’s internal affairs, in keeping the Charter of the United Nations and other hemispheric organisations.

Asked if recognising the interim president is illegal, Sir James, who is founder of the main opposition New Democratic Party, said:

“Illegal in what sense? Illegal where? Illegal in Venezuela where there are no courts or illegal in terms of the United Nations standards?

“Governments have got to — we all belong to one world and we have to make sure that we all have a good and peaceful life and enjoy the benefits of our country.

“And the question is, on your conscience, should you care at all about your neighbour? Should you not care about the impact on you? Are we going to play big and ignore the position of the United States and look on the whole of Latin America?”

He noted that over 20 countries have recognised Guaidó as the interim president and they are all calling for fresh elections, adding that there are also demands for free and fair elections.

“You know what is my position. If there is that sort of upset, etc. and the people feel that they want a free and fair election, give it to them and let them face the government that they get. Where does the US stand and where are its friends?”

Maduro was inaugurated on Jan. 10 to a second term in office after winning an election in April 2018, which came eight months earlier than due, as a result of opposition demands.

Sir James said pretty much the whole of South America is on board with Guaidó.

“The neighbouring countries of Venezuela — Columbia and Brazil — they are on board. All together, there are several in the Americas, Canada in North America, then there is Columbia, Brazil, Peru, Chile, Paraguay, Argentina, and Europe now has given notice that if they (Venezuela) don’t call elections within eight days, they are going to take their stance against Maduro. Spain has already recognised the interim change and Australia and Israel, I understand, yesterday came out in support of the United States.

“And the US has been calling on the world to stand up and be counted. And, in my view, we know what it is like after that statement at the OAS what happened in St. Vincent immediately after the speech at the OAS,” Sir James said referring to an U.S.-based resolution against which Kingstown voted last year.

“They’ve given special permission to certain countries in the Caribbean to get easier visa access and St. Vincent is one of them that was excluded. The question I want to ask Vincentians. Do they want to go and live in Russia or in China? Our linkage is in the United States.”

He, however, said that does not mean that SVG should do everything the United States says.

“I am saying we are linked and our diaspora, are they going to say that we should be anti-US when the US want to do something to improve our condition? What caused us all, our diaspora to migrate? It was a lack of opportunity and we have got to put that into the mixture.

“One has to be careful in taking a stance against your own country’s interest internationally,” the former prime minister said.

On Tuesday, Minister of Foreign Affairs Sir Louis, responding to a question in Parliament from Opposition Leader and NDP President Godwin Friday, cited the charters of the United Nations and the OAS and said that voting against the Jan. 10 resolution was the right thing to do.

8 replies on “SVG should back Venezuela’s opposition — Sir James”