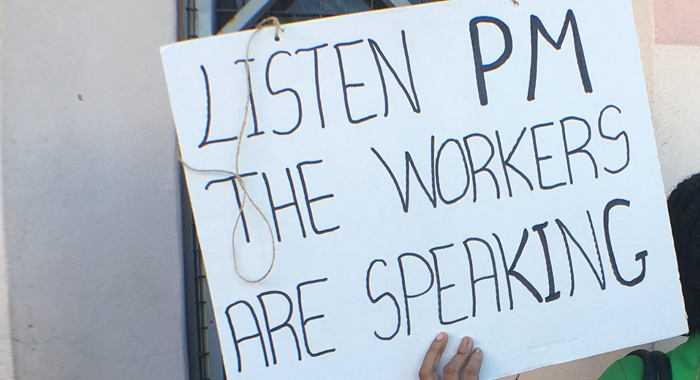 Is it that Chatoyer’s blood has run thin in St. Vincent and the Grenadines? This is the only excuse that will justify the lack of action of public servants following the judgements in the court for the Public Service Union and the “NDP teachers” in their separate matters.

This is a phenomenal ruling in that it, providing the PSC abides by the judgement, levels the promotion playing field. It ensures that all promotions are transparent and be done by a measurable rubric and not based on friendships, politics or behind the scenes wheeling and dealing. Every public servant who is above board should revel in this judgement because it holds implications for career advancement and fair treatment. Moreover, it places the Public Service Commission under scrutiny and forces it to work as intended, as a separate body from the government and not subject to the whims and wishes of the government.

In the run-up to the 2010 election, three teachers wrote to the PSC asking that the provisions put in place in Article 16 of the collective agreement be enacted for them. This article 16 agreed that teachers, although public servants, will be allowed to contest the general elections as candidates despite Section 26(1)(d) of the Constitution. Article 16 of the collective agreement was agreed upon by the Prime Minister of this country in 2005 while being fully aware of the restrictions laid out in the Constitution.

The teachers ended up resigning from their positions as public servants expecting fully to be reemployed after the elections if their bids were unsuccessful. They were not reemployed and their union sued. They lost the case and appealed. Their appeal was successful.

However, the ramifications of this successful judgement must not be taken lightly. The judge basically agreed that the argument that the reappointment of the teachers to the public service will be unconstitutional, to be nonsense. Good faith was not demonstrated by the government in honouring the collective agreement they signed with the trade union. In the broadest sense, the wording of Section 26(1)(d) of the constitution allows for Article 16 of the Collective agreement.

What does this all mean for Public Servants in St. Vincent and the Grenadines?

• It highlights a complete lack of respect for the trade unions in the country and by extension, the people they represent.

• It points to a attitude by the PM and persons in power to the rest of the Public Service. Efforts to hoodwink, belittle and demonstrate a lack of faith to public servants should not be lauded or much less pursued.

• It holds implications for the future governance of the country. With so small a population, any reduction in the eligible pool of persons who can legitimately contest elections is significant. In these changing times, any country would require fresh ideas that reflect the needs of a wider cross-section of the populace. It stands to reason that while the architects of our constitution had the right idea to limit corruption in the elections process, they also foresaw that special circumstances will arise and made provisions for it in the wording of Section 26(1)(d).

Shame on you, Mr. Prime Minister and all those who aided you in pursuit of these activities. The irony is that as public servants, they too have been helping to prime the barbecue pit upon which Elroy Boucher and the other claimants were to be roasted. Old people say, “Today for me, tomorrow for you.”

Unfortunately, the importance of these judgements has been lost between political agendas and petty ramblings. Now is not the time for unions to become bedfellows with any political party. Now is the time for all public servants, regardless of grade, experience and affiliations, to recognise that it is in their best interest that the unions be respected as the representatives of the people that they are.

Many are afraid to meet or even protest because they are afraid that their breadfruit tree will be cut down. Many public servants have mortgages, loans or are currently studying in hopes of getting a pay increase. Please remember that the same government that agreed with your unions to back loans or higher pay for a degree, is the same government that has chosen to ignore parts of an agreement it made with the same unions. If they can ignore one, now long before they ignore the other. Your breadfruit trees are being cut down. The saw may be smaller but it is happening. Time to act. Like Chatoyer’s heirs and rise up.

2 replies on “Has Chatoyer’s blood really run this thin?”