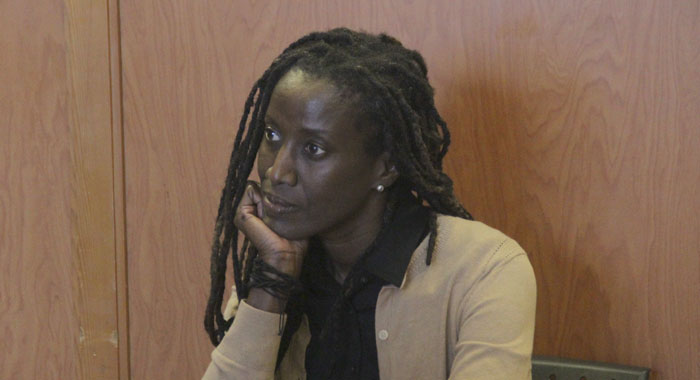 Lawyer Shirlan “Zita” Barnwell during a break in the court proceedings on Tuesday, when she was cross-examined. (iWN photo)

A lawyer and witness for the opposition in the election petitions case has admitted to making an error in her witness statement.

The error became apparent on Tuesday, day two of the trial, when counsel Shirlan “Zita” Barnwell was testifying in the petition that Benjamin “Ben” Exeter of the New Democratic Party has brought.

Exeter is challenging the announced victory of Sir Louis Straker of the Unity Labour Party in Central Leeward in the December 2015 general election.

The NDP’s Lauron Baptiste is also challenging the election of the ULP’s Montgomery Daniel in North Windward in the same polls.

During cross examination by lead counsel for the government, Senior Counsel Douglas Mendes, Barnwell said she arrived sometime after noon and stayed until the end of the final count but could not recall how much time she stayed there.

She, however, told the court that it was more than four hours.

She said she was present when the ballot box from CLF was opened and when every box opened thereafter was opened.

Mendes went through each box by name asking the witness if she was present when it was opened and in most of the instances, she said that once it was opened after CLF, she was there.

Mendes went through the list of ballot boxes in descending alphabetic order and repeatedly asked the witness if she was there when each was opened.

But lead counsel for the petitioners, Stanley “Stalky” John rose and indicated to the court that the witness had answered the question and that Mendes was suggesting that the boxes were opened in descending order of the alphabet.

Barnwell has said in her witness statement that in the count she observed that each ballot bore a crease less than half way up the ballot.

The witness further said that she concluded that the resulting crease was a true reflection of how the ballot was folded before the voter voted.

The crease indicated whether they were folded in such a way as to obscure the initials and official mark of the presiding officer who handled them, the witness said.

Her witness statement included a photograph of the said ballot.

When her evidence was put to her again, Barnwell said, “I believe they are.”

Mendes then called Barnwell’s attention to one of the ballots that she exhibited and asked her to look at the witness statement of then Supervisor of Elections, Sylvia Findlay-Scrubb.

He pointed to the ballot paper issued to CLA1.

Asked if she was present when CLA1 was opened, Barnwell said no.

The lawyer asked her if she wanted to revisit her evidence regarding what she had seen and Barnwell said, “This is an error.”

“What is the error?” Mendes asked.

“The inclusion of this ballot,” Barnwell said.

“What exactly is the error?” he responded.

“The inclusion of this particular ballot,” Barnwell told the court.

“So, in fact, you did not see that particular ballot?” Mendes told the witness.

“That particular ballot? No, I did not,” Barnwell said.

“So why did you say that you saw it,” he asked.

“That is an error. It obviously has to be when I was compiling my witness statement that was selected in error,” Barnwell told the court.

Barnwell took the stand after the conclusion of the cross examination of Maia Eustace, another lawyer, who is also an instructing solicitor in one of the cases.

Exeter, along with Ethron Crease, of Barrouallie, also testified on Tuesday.