PETITIONS TRIAL: Petitioner Exeter gets his day in court 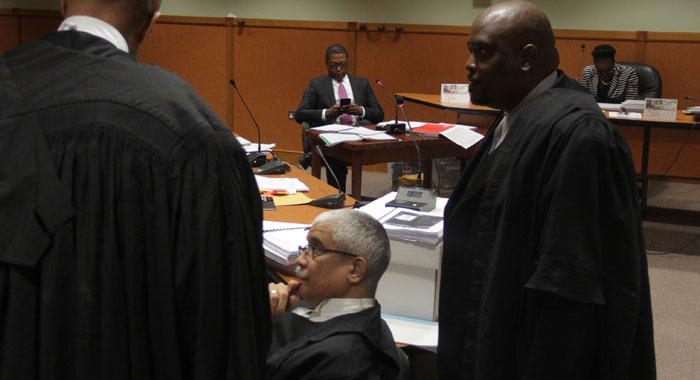 Petitioner Benjamin Exeter, in background, is framed by lead counsel for the government, Douglas Mendes, centre, and Kenny Kentish, during a break in Tuesday’s proceedings. (iWN photo)

Opposition politician Benjamin “Ben” Exeter, who has filed one of two petitions challenging the outcome of the 2015 general election got his day in court on Tuesday, day two of the long-awaited trial.

During the cross examination conducted by lead counsel for the government, Senior Counsel Douglas Mendes, Exeter maintained that it was not possible to see without opening the ballot the official mark and initial of a presiding officer after the voter had voted.

Asked if he was contradicting the evidence of lawyer Shirlan “Zita” Barnwell, who had earlier testified on his behalf, Exeter said he had not seen Barnwell’s entire testimony.

In his petition, Exeter alleged, among other things, that the ballots were pre-printed with the official mark, contrary to law.

Mendes called Exeter’s attention to the photos of the ballots he (Exeter) took in the 2015 election and asked if he sees the official stamp pre-printed on those ballots.

“Of those other ballots that you took photographs of, did any of them have the official stamp pre-printed on them?” Mendes asked.

The lawyer said he understands Exeter’s case to be that when the ballot got to the polling station they already had stamps on them.

“And you took photographs of two ballots and neither of them has any stamp on it. Does it follow, sir, that if you had pre-printed the stamps on the ballots then all of them would have the stamp of it?” Mendes said.

Exeter said that the stamp could be a very small one.

The judge, Justice Stanley John, asked if Exeter was saying that the official stamp was pre-printed.

Exeter said that he was not saying that.

“That statement was in an affidavit by the Supervisor of Election,” Exeter added.

The judge then asked him what he was saying about the ballots and the stamps.

Exeter said that he was saying that based on the affidavit of the then supervisor of elections, Sylvia Findlay-Scrubb it clearly states that that was the case.

The judge asked Mendes if it was the case that Findlay-Scrubb sworn an affidavit subsequently retracting that statement.

Mendes told the court that Findlay-Scrubb had written an affidavit a month later saying she had made an error in saying the stamp and official mark were pre-printed.

“That’s your evidence, Mr. Exeter. You said that within a month she wrote a letter saying that she made an error,” Mendes said.

Exeter said that was the case and Mendes asked him if he thinks that the former election chief was lying when she said that she had made an error in the first affidavit.

“I am not saying that,” Exeter said.

“Then why are you pursuing this if you are not saying she is lying? Why are you pursing this issue? She put an affidavit, she said something, she said afterwards, almost immediately. ‘I made a mistake.’ ‘I misspoke.’ Whatever it is.”

The judge told Exeter that he was trying to understand his position and whether he was saying that the initial statement was withdrawn at some point in time.

Exeter said that he was saying that in evidence so far, “there are so many things I can’t trust…”

The judge asked him if he had an issue with the ballot.

The judge noted that Exeter had said that his complaint was that the ballots were pre-printed with the official stamp.

The jurist further noted that Exeter went on to say that Findlay-Scrubb did say that she had made an error.

The judge further pointed out that Exeter had said he did not recall seeing any ballot with the official stamp pre-printed.

Exeter, in response to Mendes’ cross examination, said he had polling agents in all 15 polling stations and were able to see the ballots in the morning when the ballot boxes were opened before the voting began.

Mendes noted that Exeter had not put in his witness statement any polling agent who said when they opened the box in the morning, the ballots had the stamp pre-printed on them.

The lawyer further told Exeter that he has not put any witness to say that when the boxes were opened, they saw that the ballot had no official mark on them and asked if this was correct.

When the point was clarified for him, Exeter said he had no such witness.

Mendes then noted that the petition had alleged that any 2015 ballot folded in compliance with the instruction on the ballot which as a result of said defect bore the official mark and presiding officer’s initial below the line which is stated ‘Do not fold below this line’, would have to be unfolded by the presiding officer when returned to the presiding officer by the voter after having voted.

Exeter said this was the case.

Exeter said that was the case.

Exeter said he had not heard in its entirety the testimony of Barnwell, who had taken the stand immediately before him.

During his cross examination of Barnwell, Mendes had demonstrated that when a photograph of a ballot was folded on a line below the midway line that the initial and stamp of the presiding officer was visible.

Exeter said he did not hear when Barnwell agreed that this was the case with the photograph.

Mendes then told him:

“Well, sir, I am putting it to you, sir, as your own evidence demonstrate — when I say own evidence, the evidence filed in support of your case — the design of the ballot does not prevent it being folded in such a way that you can still see the initials and the stamp without pulling it back to see how the person voted.”
Exeter said he disagreed.

Mendes asked him if he was disagreeing with Barnwell’s evidence.

Exeter said that as he had indicated, he had not heard Barnwell’s evidence in its entirety.

“The manner in which it was folded, you can see,” Exeter maintained.

The trial continues at the NIS Conference Room in Kingstown.

2 replies on “PETITIONS TRIAL: Petitioner Exeter gets his day in court”