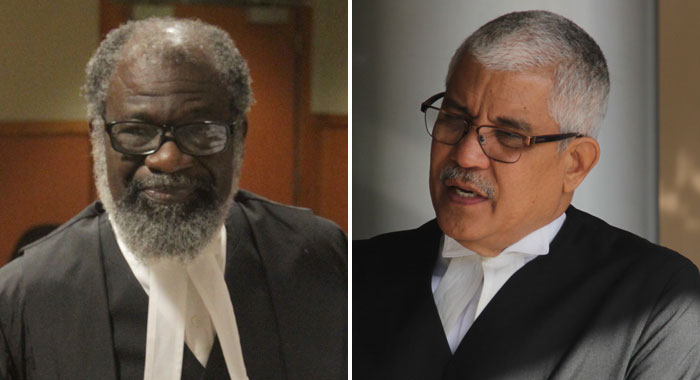 The lead counsel for the petitioners and the respondents on Monday argued strenuously about whether a witness in the case should be shown an ordinary sheet of paper or an actual ballot used in the election.

The debate came during the cross examination of Shirlan “Zita” Barnwell, a lawyer and witness in the petition that Benjamin “Ben” Exeter of the New Democratic Party has filed, challenging the announced election of Sir Louis Straker of the Unity Labour Party in Central Leeward.

In her statement, Barnwell had said that during the final count in Central Leeward on Dec. 10, 2015, she had observed that each ballot bore at least one crease less than half way up the ballot.

And, during his cross examination on Tuesday, lead counsel for the government in the case, Senior Counsel Douglas Mendes, told Barnwell that he pays attention to the English language and assumed that when she said less than half way up, she was referring to moving from the bottom of the ballot.

Having established this, Mendes asked Barnwell to look at the photograph of the ballot that was tendered as part of her evidence.

Mendes said he wanted to do “a little experiment” and told her that he was pretending that a sheet of paper he had in his hand was a ballot and that he had folded it in half.

“I want you to examine it and see that I have folded it halfway, please,” Mendes told Barnwell.

He further said that on the halfway crease he had drawn a line.

Mendes then passed the paper to the bailiff to pass to the witness.

But the judge, Justice Stanley John, instructed him that before showing it to Barnwell he should show it to the counsel for the petitioner.

On receiving the paper, lead counsel for the petitioners, Stanley “Stalky” John rose and told the court he was not sure about the relevance of the exercise in which Mendes was engaged.

“It may be that I am a bit slow in appreciating,” counsel John said, adding that he wonder if Mendes could “lay the foundation again, at the risk of being redundant, to show the relevance”.

Mendes, however, asked to answer the question in the absence of the witness and the judge instructed Barnwell to exit the courtroom, which has been set up, temporarily, at the conference room of the National Insurance Services building in Kingstown.

After Barnwell left, Mendes told the court he would have thought that I was “fairly obvious” what he was seeking to do.

He said that Barnwell has said that throughout the count she had observed that each ballot bore at least one crease less than halfway up the ballot.

He noted that Barnwell had established what direction was the bottom of the ballot and therefore which was up the ballot.

The lawyer said that in order to understand where the creases are and to understand the language, he was using a visual aid to demonstrate or to apply Barnwell’s language.

Mendes said that once Barnwell was satisfied that the piece of paper had been folded “half way up”, he would ask her what is less than half way up.

He said once the court can agree on what less than half way up is, they would have an example of the crease that she observed.

“We can then determine –because she said, ‘the crease can indicate conclusively whether they were folded in such a way as to obscure the initials and official mark of the presiding officer who handled them’,” Mendes said.

Counsel John, however, said that he was not satisfied and asked if Mendes was challenging or endeavouring to challenge the evidence given by Barnwell in that paragraph.

He said there was no evidence in any of the witness statements by the respondents challenging the evidence.

The judge, however, said he did not understand Mendes to be challenging the evidence but to be seeking clarity.

The judge noted that Barnwell had said that the crease would indicate conclusively whether the ballots were folded in such a way to obscure the initial and official mark of the presiding officer.

Counsel John said the petition had allegation that that was, in fact, the case.

He said that if that is, in fact, the case, the person or persons who should be in the best position to determine if that is so is the presiding officer.

Justice John, however, told the lawyer that the court differs with him on that point, and cited Barnwell’s evidence.

“She is speaking there from personal knowledge… She is competent to say that because she was there. She knows how they were folded,” the judge said.

Counsel John said that he had gathered from Mendes’ reply that the purpose of the cross-examination is to challenge the accuracy of that statement.

The judge, however, said he understands Mendes to say that he wanted to assist the court in seeing how far from the bottom the crease was.

Counsel John, however, said that if the objective was to verify the allegation in the witness statement and the allegation is in relation to a ballot, why use a piece of paper.

“To my mind, my lord, that can only lead to confusion. We have ballots exhibited and it seems to me that if the situation is to not be further confused and the witness confused, then my learned friend put to her an actual ballot and look at the exhibit that she is saying.”

Mendes said that Barnwell did not say if one folds the ballot along the crease that she observed it would obscure the initial and the stamp.

He said that Barnwell said that if the ballot is folded along the crease it would demonstrate conclusively whether they obscured the initials and stamp of the presiding officer.

Mendes said that if the court carries out the exercise it would indicate this conclusively.

He told the court that he thinks he had demonstrated the point and has answered counsel John’s objection and asked to be permitted to proceed with the exercise.

Mendes said it was clear to him that counsel John understood “the problem” that Barnwell has created for him with the language that she used.

“Because, obviously, if you fold it along a crease less than half way up, it would not obscure the top. That is what I am trying to demonstrate.”

He said he did not understand why counsel John was objecting so strenuously “against something which, one way or the other, was fairly innocuous.

“Except, of course, that it does not lead to the conclusion that the witness does not otherwise lead you to,” Mendes added.

Counsel John, however, said that as long as Mendes insists on putting the paper to Barnwell it is not the best evidence.

“It is likely to lead to a conclusion. The witness testifies to ballots. There are ballots. The court can look at the ballots.  Why does my learned friend have a problem in looking at the ballots? Because that would declare and establish exactly and accurately what he is speaking to.”

He said that if Mendes is saying it is an innocuous exercise, he sees no reason why Mendes ought not to look at the ballot.

Counsel John further noted that Mendes had suggested that he does not have an appropriate ballot.

“The best way to look at that is to look at the actual ballots. I would have no objection, my lord, to my learned friend’s application to the court that you look at the ballot actually to make the point that he wish to make.”

Counsel John said he objected to the “contrivance”, resulting in the judge saying it was not a contrivance.

The lawyer, however, maintained that it was, saying that the piece of paper was not a ballot and that his use of the word “contrivance” was not intended to be “derogatory” but “descriptive” of Mendes.

But while counsel John was speaking, Mendes tore from Barnwell’s witness statement the photo of the ballot that Barnwell has spoken about.

He told the court that he would use it to illustrate what the witness is speaking about.”

“That’s not the ballot,” John said, referring the photograph.

“My lord, I object to that because that is not the ballot. That is a reproduction of the ballot that the witness is referring to and the ballots are available to the court and the court has, based on well-established principles, my lord, the right to ask that the ballots be brought to the court to be looked at.”

The judge, however, overruled John’s objection and allowed the photograph to be shown to Barnwell.

“That is not what the witness saw,” counsel John said.

The judge noted that he had noted the objection.

When Barnwell returned to the court, she was shown the photograph of the ballot.

She told the court that it looks the same as what she actually saw at the final count, but the size was not the same size as the document she saw.

She further told the court that she had seen different ballots in terms of how they were cut, adding that some had a little more at the top.

Barnwell said that when she saw the document she was shown in court, she could not see the initial and stamp.

Told that she had said that the ballot was creased less than half way up, Mendes then retrieved the photograph and folded it at what he said was less than halfway up.

He gave it back to her and asked if she could see the initials and the stamp.

Asked if she agreed that when she creased it along a line less than half way up that she could see the initials and stamp of the presiding officer, Barnwell said, “Of that ballot.”

“Of a ballot you said was creased less than halfway up?” Mendes asked.

“But there were different–” Barnwell was saying when Mendes interrupted here, saying that she had not said in her witness statement that they were different

“You said throughout the count I observed each ballot had at least once crease less than half way up,” Mendes said.

Mendes noted that she had said that “the crease” and asked her what crease she was referring it.

She said the crease less than half way up the ballot.

“Good. So, therefore, when it is folded on the crease less than halfway up, you can see the initial and the stamp. Is that right?”

Asked which ballot she was talking about, Barnwell said there is one where the stamp is; another did not have any stamps.

She pointed to a ballot that did not have any stamp at all.

7 replies on “PETITIONS TRIAL: Lawyers argue over ‘reproduction’ of ballot”