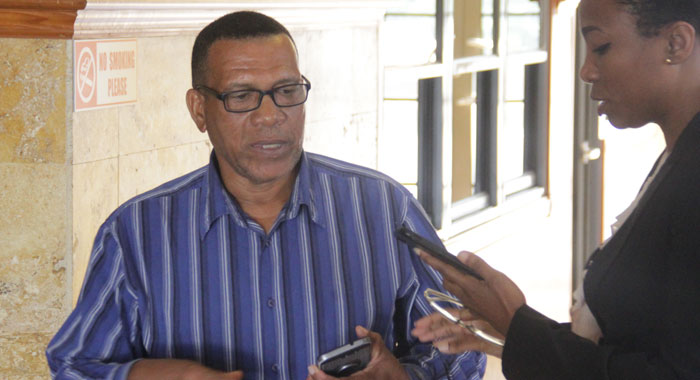 A polling agent for the New Democratic Party (NDP) in the Dec. 9, 2015 election in Central Leeward says that he had noticed that the initials and stamp of the presiding officer were missing from the ballot but did not think this was important until it was pointed out the following day.

Paul Creese, of Barrouallie, who was an agent for the NDP’s Benjamin Exeter in the election made the statement on Wednesday at the continuation of trial of the petition that Exeter has brought challenging the result of the election.

Sir Louis Straker of the ruling Unity Labour Party was declared winner of that constituency. Exeter is asking the court to overturn that outcome.

Lauron “Sharer” Baptiste of the NDP is asking the court to do similarly in the case of the election of Montgomery Daniel in North Windward.

The ULP was declared winner of the seat, having won eight of the 15 parliamentary districts, while the remaining seven went to the NDP.

Creese was an agent for Exeter at polling station CLB1.

It was not his first experience working as an election agent, having served as the presiding officer in 2001 and a poll clerk in 1998.

During his cross examination conducted by lead counsel for the government, Senior Counsel Douglas Mendes, Creese told the court that in 1998 and 2001 he knew that one of his duties was to ensure that the initial and the stamp was on the ballot after an elector had voted.

Mendes asked Creese if he knew that the ballot could be invalidated if the presiding officer’s stamp and initials are not on them, and it was therefore important to ensure their existence.

Asked if there was there any reason why that knowledge escaped him in 2015, Creese said:

“To be honest, it didn’t cross my mind to that extent.”

This resulted in loud laughter from Senior Counsel Anthony Astaphan, another lawyer for the government in the case, quickly apologised.

He told the court that he was aware that the summary of his witness statement was filed on June 8, 2018, adding that he did not sign it at that time because he was out of state attending a seminar in North Carolina.

He said he had left St. Vincent on June 5, 2018 and after North Carolina, had travelled to Jamaica before returning home sometime in July 2018.

He said he had submitted the statement to the NDP’s legal team sometime between December 2015 and January 2016.

Creese told the court that he did not have a copy of the statement but between submitting it and when he left St. Vincent he had discussions with the NDP attorneys.

He told the court he could not say exactly when he had the talks, but would say it was within the six months before June 2018.

Creese told the court that on the day of the election he took notes in a notebook, which he submitted to the party within a week after the vote.

He said he took notes of things that were happening.

However, when Mendes noted that entries in the notebook were not in chronological order, Creese told the court that he had rough notes and wrote them over in the notebook after the vote count, but before leaving the polling station.

Mendes pointed out that the notes that Creese made “at your leisure” did not indicate that the ballot did not have the stamp and the initials of the presiding officer.

The lawyer suggested to the witness that it is not true when he says in his witness statement that when the presiding officer showed the poll agents the ballots they did not include any initial or stamp on it, but only the official mark.

“What I am saying, sir, is that I knew that the stamp was not there because all I saw-” Creese was telling the court when Mendes interrupted him.

Asked if he could be allowed to answer the question, Creese said that he voted at the same polling station and the presiding officer presented him with a ballot “the ballot paper was stamped”.

He, however, agreed with Mendes that he did not give any evidence about his own ballot.

Mendes told Creese that since that is the case, lead counsel for the petitioner, Stanley “Stalky” John would not have had a chance to respond to it.

Mendes asked Creese if he had put in his notes anything about the missing initials and stamp and the witness said he made a mental note of it, but did not put it in his notebook because he didn’t think it was a critical issue “at the time”.

He said he became aware that it was a critical issue one day later.

“The following day, when we were discussing what went on, that issue was raised and I remembered…. There was no stamp on the ballot, there was a stamp on the counterfoil,” Creese told the court.

Mendes told the witness that he was putting it to him that he had not been making any observation and was not looking for the stamp and is imagining that it was not there.

“That is not so, sir,” Creese told the court.