PETITIONS TRIAL: Findlay-Scrubb to face another round of cross examination 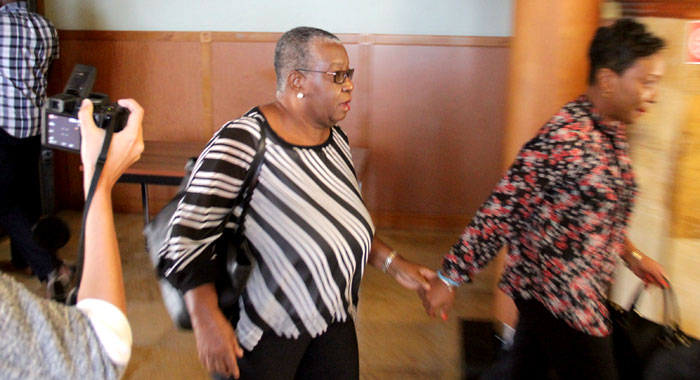 Former Supervisor of Elections, Sylvia Findlay-Scrubb, who supervised the 2015 general elections which are now the subject of two election petitions is slated to face another round of cross examination today, Monday.

Her cross-examination by Keith Scotland, lead counsel for one of the petitioners, will bring to three, the number of days that she has been on the stand so far in the trial, which is into its sixth day.

The trial is taking place at the NIS Conference Room in Kingstown from 9 a.m. to noon and 1 p.m. to 4 p.m., Mondays to Fridays.

Scotland represented Lauron “Sharer” Baptiste of the main opposition New Democratic Party, who is challenging the announced victory of the ruling Unity Labour Party in North Windward in the 2015 poll.

The NDP’s Benjamin “Ben” Exeter has also brought a petition challenging the victory of Sir Louis Straker of the ULP in central Leeward.

Scotland’s cross examination of Findlay-Scrubb should have begun last Friday, but both sides agreed to postpone it to today, because Scotland had to return to his home country, Trinidad and Tobago on Thursday.

On Thursday and Friday, Exeter’s lead counsel, Stanley “Stalky” John, cross examined Findlay-Scrubb, asking her a number of questions, which he said went to her credibility.

He made the point amidst objections by the respondent’s legal team.

During Friday’s cross examination, Findlay-Scrubb said she is familiar with the dictates of the House of Assembly regarding which ballots should be rejected at the preliminary or final count.

She agreed that the rules say any ballot paper that does not bear the official mark shall be void and not counted.

However, Senior Counsel Douglas Mendes, Findlay-Scrubb’s lead counsel objected to the question, saying the court would have to determine that issue and the issue of what is a ballot paper

Winston Gaymes, the returning officer in Central Leeward in the 2015 vote has said in his witness statement that he counted ballots that did not have the official mark or initials of the presiding officer.

This was the case in polling stations where all of the ballots lack the authenticating marks.

Counsel John asked Findlay-Scrubb if she was concerned that the ballots were counted.

Mendes again objected, saying that was another way of asking the same question.

Counsel John then asked Findlay-Scrubb if, having knowledge of that rule, she was concerned that Gaymes counted the ballots.

The judge told counsel John that he was asking Findlay-Scrubb whether what Gaymes did was right or wrong.

Counsel John, however, said he was wondering if Findlay-Scrubb had an opinion on the matter, given what she had said.

The lawyer said that the former election chief’s answer would demonstrate her own attitude.

The judge, however, said that counsel John was asking for Findlay-Scrubb’s opinion.

Counsel John asked that the witness be excused and the judge went on to tell him to bear in mind that Findlay-Scrubb was a witness in her capacity as Supervisor of Elections at the time of the elections.

The judge said that while an allegation has been made about the conduct of the election, when it come to the rules and the conduct therefore, she can speak about having familiarised herself with those rules.

Whether her opinion on the conduct may have been correct is for the court to determine, the judge said.

But counsel John told the court that part of the cross examination regarding issues of fact would inevitable go to the credibility of the witness, a point with which the judge agreed.

“An issue of fact is her attitude towards her job and responsibilities generally, is her sense of responsibility in particular, her knowledge of her job and the parameters of her job. She had made definitive statements about that. So if there is other evidence which may reflect on the veracity, the reliability.”

The lawyer said that if Findlay-Scrubb, being familiar with the rules, “has a certain attitude, if for instance the attitude she has taken about certain instances impact on that, if the evidence solicited indicate that, after all, she is not as responsible, as alert”.

But Justice John maintained that that is a matter for the court to determine.

“In other words, you can question her about her job and level of responsibility,” the judge said.

Counsel John said that is what he was endeavouring to do.

However, Mendes told the court that there was no pleading in the issues in the case regarding whether the SEO held correct opinions concerning what the returning officer did.

He said there was no pleaded case regarding the supervisor of election’s conduct or her responsibility, except for the provision of official list and there is no evidence in that regard, and the pre-printing of the official ballot.

Mendes said there was no generalised allegation regarding what Findlay-Scrubb’s responsibilities are and how she conducted then.

The questions regarding her responsibilities are questions that counsel John raised, Mendes told the court.

Meanwhile, Senior Counsel Anthony Astaphan, another lawyer for the government in the case, said that rule 41(4) of the election rules makes it very clear that the Supervisor of Election has no role to play in determining whether an election is valid or not.

The judge ruled that counsel John would not be permitted to pose to Findlay-Scrubb questions as to her opinion as to whether another witness was correct in performing his duties.

The judge further said that, as Mendes has pointed out, counsel John must confine his cross examination to his pleaded petition.

2 replies on “PETITIONS TRIAL: Findlay-Scrubb to face another round of cross examination”