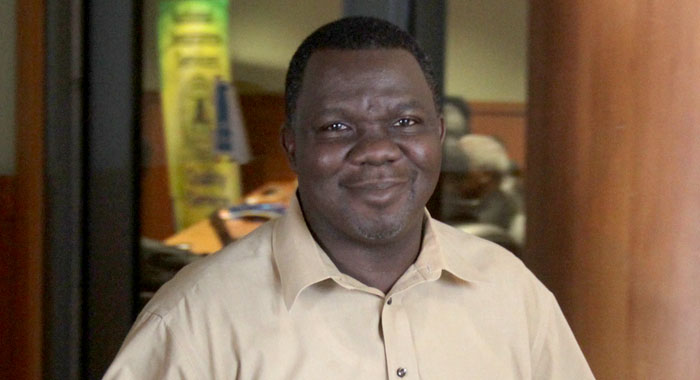 Sylvester King, an employee at the Electoral Office leaves the court after being cross examined on Friday. (iWN photo)

An electoral official who said in a witness statement that the Central Leeward results in the 2015 election were among the last to reach the Electoral Office, told the court on Friday that he could not recall the flow of the results.

In his witness statement, Sylvester King, an employee of the Electoral Office, said that some of the central Leeward results came early but most came closer to the end of the count, but all of the polling stations sent in their count.

King told the court that he couldn’t recall the order in which the polling stations’ results were sent in.

He said he cannot recall that in Central Leeward quite a few polling stations sent in their results early, adding that quite a few persons were recording the results in Kingstown.

Asked how he knew that the results from that constituency were among the last, King said that in paragraph 13 of his witness statement, the election score sheet, as exhibited, indicated this to electoral officials.

“… so we knew there were several stations that were not yet recorded.”

King said he couldn’t recall the timing of the results.

John then asked him on what basis was he was able to say in his witness statement that Central Leeward was among the last results to come in and that some came early but most came at the end of the count.

“I really don’t know, because different persons were recording the scores,” King said.

John pointed out to King that he made the witness statement and had said it was correct and should know what is in there.

After a pause, John asked, “Shouldn’t you know what is in there?”

“And on what basis do you say in paragraph 15 that central leeward was among the last, if not the last result to come in?”

“Sir, we had, on that evening, several persons recording the scores and as indicated — it’s on the score sheet,” King said.

“Indicated by whom?” John asked.

“So this evidence you are giving is not from your first hand knowledge?”

“I cannot recall. Several persons were taking the results, I was supervising them.”

“When would you say the last results came in? At what time?” John asked.

“Was it before midnight or after midnight?’ John asked.

“May I suggest to you that there was a lag of hours between when the majority of the count came in from Central Leeward and when the last result came in.”

However, counsel for the respondents Senior Counsel Douglas Mendes objected to the question, saying that John had led no such evidence.

“Are you in a position to say if the presiding officer was sending the counts to his office immediately on their completion?” John asked.

John then asked King again if the information on the score sheet from which he made this statement was from his personal knowledge.

He said he “cannot recall”.

“As I said before, information was coming from different persons,” King said, adding that he had made the statement from information he collated.