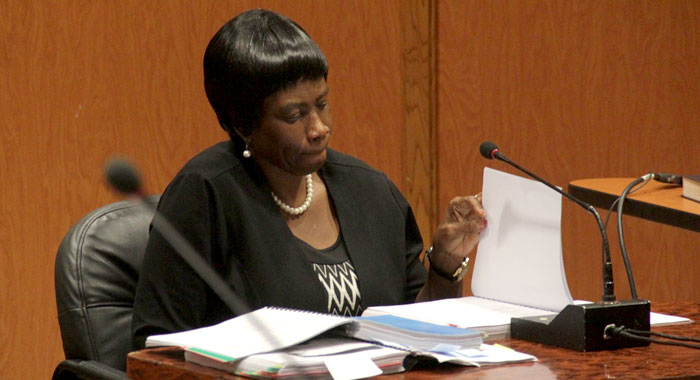 Kathleen Jeffers, of Barrouallie, was the presiding officer at CLA 1, looks over a document during a break in her cross examination on Monday. (iWN photo)

The cross examination continues today, Tuesday, of a presiding officer in the 2015 election in Central Leeward who said she put her initials and official mark on both the ballot and counterfoil.

Kathleen Jeffers, of Barrouallie, who was the presiding officer at CLA 1, said on Monday that when the poll initially started, she placed her initials on the counter foil and also on the ballot, below the line that says, “Tear Here”.

According to the election rules, the ballot paper is supposed to be designed in such a way that when the counterfoil is removed, the official mark and initials of the presiding officer remains on the portion where the voter expresses their preference for one candidate or the other.

However, evidence deduced in the trial over the last six days is that the ballot was designed in such a way that if the presiding officer followed the instruction regarding the section that should be removed as the counterfoil, the initial and official mark would also be removed from the ballot.

She said she later telephoned the returning officer, Winston Gaymes to verify what exactly should have been done.

Jeffers told the court that she did this because the space for her initials and the official mark were on the counterfoil, but Gaymes had told them that they should be on the ballot.

Jeffers recalled those facts as lead counsel for the government Senior Counsel Douglas Mendes questioned her regarding a section of her witness statement that he said he wanted to amplify before she was crossed examined.

But shortly after this, as she was cross examined by Queen’s Counsel Stanley “Stalky” John, lead lawyer for the petitioner, Jeffers told the court that she could not recall many of the facts from election day, Dec. 9, 2015.

“I don’t want to say somebody and it’s not, so I can’t recall,” said the witness, who also told the court that she also worked once as a poll clerk.

Jeffers told the court that she has experience regarding what happens in polling stations and was aware that the presiding officer is in charge.

She said that as presiding officer, she took instructions from the returning officer  and also followed any instructions he relayed through the poll clerk.

Jeffers, however, said she did not take instructions from the agents of the candidates.

She told the court that Gaymes, and one Mr. Robinson, a previous returning officer, trained she and other presiding officers during a session at the Barrouallie Government School sometime before the 2015 election.

She said she was trained about the election rules and was told that once the vote was completed, she should immediately count the ballots.

However, Jeffers did not do this as soon as the poll closed.

She told the court:

“I closed the poll at 5 and then we were there in the process of going to count the ballots and Ms [Esla] Sam asked about a certain voter, whether the person had voted and then Sam looked at the numbers and realised there was some confusion about the numbers. She said she would sort it out when she goes home. And I said no and at that point I seek everybody permission to go through the list and the counterfoil to ensure we all left with the same number. And then we proceeded to do that.”

During the cross examination of Sam last week, the court learnt that Sam, an agent for the petitioner, skipped over more than 60 numbers and repeated 10 others on a list on which she was keeping track of the number of persons who had voted.

Jeffers told the court that after closing the poll, she had a conversation with everybody and asked if they were satisfied that the poll went well.

All of the poll workers were sitting where they had been sitting during the poll and the only additional person there was Ethron Creese, who had come to view the process on behalf of Exeter.

She said that the poll workers might have made one or two observations about the day’s activities but she can’t recall.

Jeffers, however, told the court that at the time of the conversation, the ballot box was in the presence of everyone, where it had been for the day.

She said she did not open the ballot box then  “but may have” proceeded to count the counterfoils.

“I can’t recall exactly,” Jeffers told the court, adding that the counterfoils were counted to ensure that she had the correct number of documents.

“Correct in relation to what?” John asked.

“The ballots in the ballot box,” John said.

Jeffers said she knew how many ballots were in the box because the figure was also on the register.

She said she counted the counterfoils first because doing so is part of the procedure.

Ben Exeter of the main opposition New Democratic Party has brought the petition challenging the announced victory of Sir Louis Straker of the Unity Labour Party in Central Leeward in the poll.

In a second petition, Lauron “Sharer” Baptiste of the NDP is asking the court to overturn the announced victory of the ULP’s Montgomery Daniel in North Windward.

The ULP was declared winner of the election and began a fourth consecutive term in office, having won eight of the 15 parliamentary districts, while the remaining seven went to the NDP.