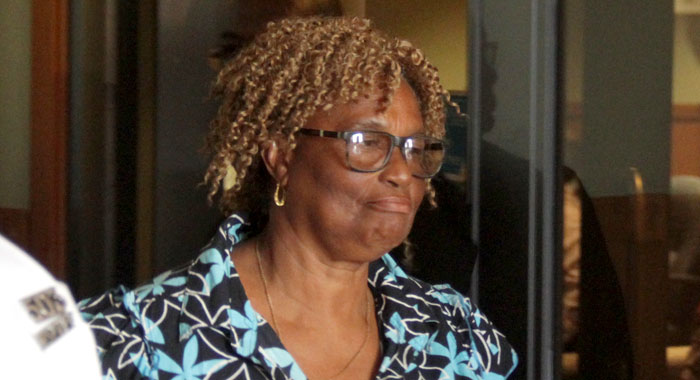 A presiding officer in Central Leeward in the 2015 elections says she thought it was wrong to place in the ballot box, ballots without her initials and official mark.

“The design was different. So I was thinking it is a new style,” Susan Thomas, of Layou, who was presiding officer for CLF, told the court, on Monday, during cross examination.

She, however, said that while tallying the votes, she thought it was ok to count the ballots that she had earlier thought was wrong to have placed in the box.

“That is required of me, so I had to count them,” said Thomas, a seasoned electoral worker who has worked in every election since 1989.

She was testifying on behalf of the government as it defends itself against the petition filed by Benjamin “Ben” Exeter, the candidate for the main opposition New Democratic Party (NDP) in Central Leeward in the 2015 election.

Thomas was a presiding officer in the 2010 and 2015 elections and is very familiar with what a ballot looks like, she told the court during her cross examination by Queen’s Counsel Stanley “Stalky” John, Exeter’s chief counsel.

She told the court that during her training, she was told to ensure that she places her initials and official stamp on the ballot before handing it the voter.

She said that on election day, she complied with the training provided by Winston Gaymes, the returning officer for Central Leeward, about three weeks before the election.

During the training, Thomas said, she was told to put her initial on the box provided on the counterfoil, Thomas said.

Thomas told the court that she had previously been trained on where to put her initial and stamp by “Mr. Robinson”, the previous presiding officer.

She told the court that the 2015 ballots were not perforated and the equipment provided by the electoral office included a ruler and a pair of scissors and she used both to detach the counterfoil from the ballot.

It was her first time working in an election that she had to use a pair of scissors or a ruler to tear the counterfoil from the ballot.

Shown a witness statement, Thomas told the court that the ballots she was used to looked like those from the elections before 2015.

“So why did you tear off the box with the initial and the stamp?” John asked the witness.

“Because it mark ‘tear here’ and the design was different,” Thomas said.

She said her decision to tear the ballot as she did was not her fault.

“I was following the directions, what the ballot said,” Thomas told the court.

She said that the counterfoil is removed from the ballot to preserve the secrecy o the vote.

However, because of the design of the 2015 ballots, when she tore off the counterfoil with the voter’s number, she tore off the box reserved for the presiding officers initial and official mark as well, Thomas told the court.

Previously, she had known that the box with the initials and stamp goes into the ballot box, as part of the ballot, the witness said.

She said that when Gaymes trained her, he instructed her to make sure that the box with the initial and official marks be part of the ballot placed in the ballot box.

Gaymes also instructed her to remove the counterfoil from the ballot she was putting into the box, Thomas told the court.

She said she also carried out his instructions by removing the counterfoil from the ballot.

But when she came to remove the counterfoil, she found that there was no perforation line, so she put a ruler and tore it or used a scissors and cut some, Thomas said.

She said that in all her years as a presiding officer she had never ended up with a ballot looking like those in 2015.

Thomas also told the court that in previous years, the ballot box had a key but in 2015, they had plastic ties.

She said she removed the ties by cutting them with a scissors and had received training on how to put the ties on the ballot box.