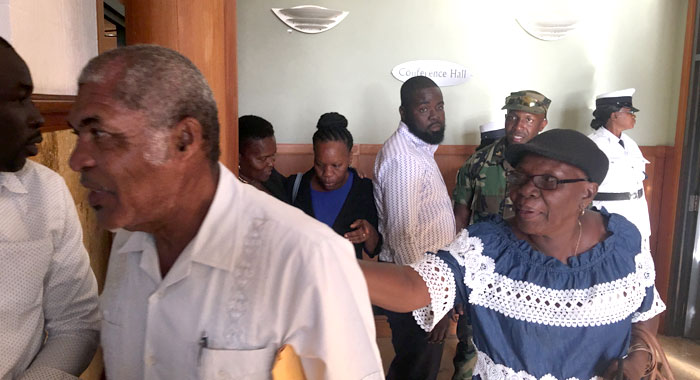 The hearing of verbal evidence in the two petitions challenging the results of the December 2015 general elections wrapped up in Kingstown on Tuesday with acting High Court judge, Justice Stanley John saying a ruling could come next month.

“I can safely say before the end of March,” he said of the timeline for his decision, noting that the court was hearing in 2019, petitions challenging the results of the December 9, 2015 general elections.

The hearing of the evidence took seven days and lawyers, on Tuesday, told the court they would like 10 days in which to make written submission.

Queen’s Counsel Stanley “Stalky” John, the lead lawyer for Benjamin “Ben” Exeter, an opposition New Democratic Party (NDP) politician, who is challenging the results in Central Leeward, initially made the suggestion, which was supported by lawyers on both side.

Justice John, however, noted that 10 days would take the trial to March 29.

“I would then have to digest both these submissions in one night when you have 10 days to prepare them. How fair is that?” the judge said.

Counsel John told the court that is why he was starting from the outside date of the trial period, March 1, and asked if the date is “cast in concrete”.

“That is cast in concrete,” the judge said, referring to the dates of the trial that Justice Esco Henry had set last December, before recusing herself from case.

Senior Counsel Anthony Astaphan, another lawyer for the respondents, asked if the date was “cast in concrete” for the written submission or the completion of the trial, and the judge said for the trial.

Senior Counsel Douglas Mendes, lead lawyer for the government in the case, rose and told the court that he, too, would like “to chip away slightly at that concrete” — triggering some laughter.

Mendes said that his side was in agreement, and if he was reading counsel John correctly, and subject to the direction of the court, the lawyers need more time to prepare the written submissions.

He said he wanted to suggest a date for the making of oral submissions outside the three-week period set down for the trial.

Justice John, however, said he was in no position to make that decision to take the trial beyond March 1, adding that all parties agreed those dates.

He said that to go beyond that date, certain things will have to be done and couldn’t be done during Tuesday proceedings, adding that they would have to include a discussion with the Registrar of the High Court.

Mendes told the court he did not think that when Justice Henry fixed the date for the trial she had intended for there to be a decision within the three-week period.

“The three weeks was fixed really for the trial, for the hearing of the evidence. I don’t think that anybody anticipated that we would have had submission and a decision from the court within that period,” Mendes said but added that that would be desirable.

The judge told the lawyers that he will hear oral submissions the week beginning March 4 and then he would take “a couple days” to make his decision.

On Tuesday, the trial saw the completion of the cross examination of Kathleen Jeffers, the presiding officer in at CLA 1, a polling station in Central Leeward.

Jeffers admitted to making multiple mistakes during the final count of the vote in that district, which election officials say was won by Sir Louis Straker of the ruling Unity Labour Party (ULP).

Ashanti Caesar-Benjamin, another presiding officer, told the court that she had placed, in the ballot box, after the preliminary count both of her Form 16, in which the vote data is recorded.

She, however, said that she was told that at the final count, the documents were not found.

The trial did not hear the testimony of Winston Gaymes, the returning officer for Central Leeward, who admitted in a witness statement that he counted ballots that he knew were void.

Gaymes, who has been living overseas for some months, was not called as a witness in the case.

In the North Windward petition, the returning officer, Ville Davis denied the allegation of Cheryl Sutherland, a constituent who election officials had randomly asked to witness the final count, that the ballots were not actually counted during the purported final count.

The NDP’s Lauron “Sharer” Baptiste is challenging the announced victory of the ULP’s Montgomery Daniel in North Windward.

Electoral officials say that the ULP won the poll by taking eight of the 15 parliamentary seats for a fourth consecutive term in office.

The remaining seven seats went to the NDP, in a repeat of the 2010 results.

One reply on “PETITIONS TRIAL: Election petitions ruling by end of March”