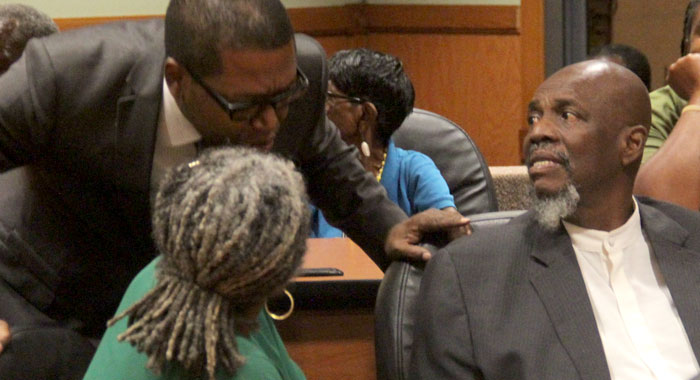 Central Leeward petitioner Benjamin “Ben” Exeter, centre, chats with former Leader of the Opposition, Arnhim Eustace, right, under whose leadership the NDP filed the petitions, chats with and Mrs. Jennifer Eustace. during the hearing. (iWN photo)

The main opposition New Democratic Party said Thursday the ongoing trial of the two petitions it filed challenging the results of the Dec. 9, 2015 general election has vindicated its outcry after the poll.

On March 21, acting High Court judge Justice Stanley John will hand down a ruling in the case, in which the hearing of oral evidence ended on Tuesday, after seven days.

In a media statement, the NDP said:

“In witness statements and cross-examination testimony, compelling evidence was given by the witnesses for the petitioners concerning numerous serious irregularities and illegal practices that took place in the 2015 general elections.”

The NDP said evidence given by the respondents’ witnesses also supported the NDP’s claims of “irregularities and unlawful practices by election officials on election day and at the final count and purported final count”.

To illustrate, the party said there was evidence showing that “the ballot papers used for voting did not conform in fundamental ways to the requirements of the law and that, when they were used at the polls, it resulted in their mutilation and in the absence or improper placement of the official mark and initials of the presiding officer on them”.

The Unity Labour Party of Prime Minister Ralph Gonsalves was declared winner of the election by an 8-7 margin.

But the NDP, under the leadership of then Opposition Leader Arnhim Eustace, filed two petitions, challenging the outcome in Central Leeward and in North Windward.

Godwin Friday, who took over as Opposition leader and NDP president in November 2016, continued the legal challenge to the outcome of the polls.

The party said that witnesses for the respondents, when cross-examined by the petitioners’ lawyers, Queen’s Counsel Stanley “Stalky” John and Keith Scotland, also gave evidence “that supported the petitioners’ claim that the presiding officer’s official mark and initials that were required by law to be on each ballot counted were wrongly placed on the counterfoils and were entirely missing from ballots.

“Moreover, notwithstanding this fatal flaw, those ballots were counted as though they were legal ballots.”

The party said that the evidence given at the trial confirmed that in at least one polling station in Central Leeward, all of the ballots did not have the official mark and initials of the presiding officer on them and were, therefore, illegal.

“Yet, they were counted as though they were legal ballots,” the party said.

It said that evidence given at the trial also confirmed, among other things, that the petitioners’ complaint that plastic ballot boxes with plastic ties to hold the lids in place were used for voting instead of the boxes with secure locks that are required by the Representation of the People Act, our election law.

“A respondent’s witness also confirmed that in North Windward all the Form 16s and other essential notes of the returning officer needed to substantiate the results in North Windward were missing and apparently could not be found. Yet, the final result of the poll was determined and declared.”

The NDP said it has consistently raised these and other serious matters concerning the nation’s elections process.

“The trial of the petitions has again highlighted our concerns.  It has shown that the outcry we raised following the 2015 general elections was not frivolous as some in the ULP have claimed but was serious and backed up by facts and evidence.

“We continue to call for immediate fresh elections and for reform of our country’s elections practices and processes. This includes the establishment of an independent electoral commission to oversee our elections. There must also be strict adherence to the election laws.”

The NDP said the petitions have “clearly shown the urgent need for changes before the next election.

“We cannot go into another election knowing that the process is seriously flawed and that the results cannot be trusted to be the true reflection of the will of the people. If we are to live up to the claim of being a modern democracy, we cannot fail to act. The people demand it and the NDP, as always, supports the wishes of the people of SVG.

The NDP applauded “the hard work and tremendous skill of the entire legal team who represented the petitioners.

“The entire nation owes them a debt of gratitude. Their work has shown us what it takes to ensure free and fair elections in SVG and how hard we must sometimes work to get it done.

“We also salute the courage and fortitude of the witnesses who, despite repeated delays and various obstacles, came to court and gave their evidence for the petitioners as their consciences dictated. This, too, is national service,” the party said.