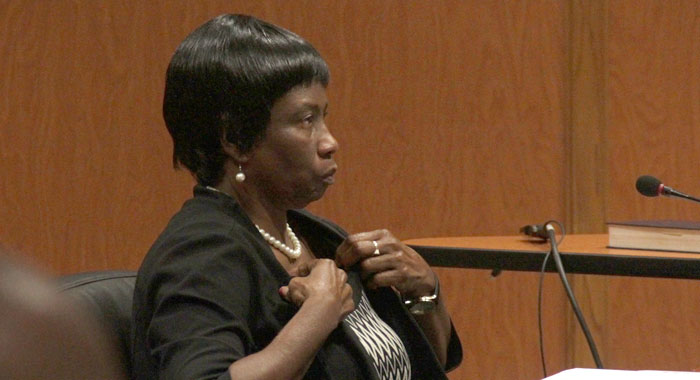 Kathleen Jeffers during a break in the court proceedings oon Feb. 18, 2019. (iWN photo)

The presiding officer at a polling station in Central Leeward, where the 2015 election results were handed in more than five hours after the polls closed, has explained the events between the closing of the poll and the issuing of the results.

Kathleen Jeffers, who was presiding over polling station CLA 1 gave an account under cross examination last Tuesday during the trial of the petition challenging the outcome of the vote in Central Leeward.

Jeffers, who was cross examined by Queen’s Counsel Stanley “Stalky” John, lead lawyer for the petitioner, Benjamin “Ben” Exeter, told the court that she announced the close of the Dec. 9, 2015 poll at 5 p.m. that day.

She, however, said that shortly thereafter, Esla Sam, Exeter’s agent, had a query about the number of persons who had voted at the polling station.

During the cross examination of Sam, it emerged that she had repeated 10 numbers and skipped over 60 as she kept track of the number of persons who had voted.

Jeffers admitted to a number of mistakes in her conduct of the election and the final count.

They included not recording the number of ballots she received or was used in the polling, and being confusing about the number of registered electors and number of persons who actually voted.

Last Tuesday, she said that after Sam’s query, she and the various persons involved in the election at the polling station went through an exercise of reconciling the list of persons who had voted.

She said that there were corrections and at the end they all had the same figures.

Jeffers told the court that the poll clerk kept a record of the voting and indicated it to her.

Asked if she thinks that as the presiding officer she should have been in a position to say how many persons had voted when the voting had ended, Jeffers said:

John called Jeffers’ attention to Rule 39 of the election rules, which details what is to be done at the close of the poll and the order in which they should be done.

Asked if she did that at the end of the voting, Jeffers said, “I honestly cannot recall at this time.”

He pointed to her witness statement, where she said that after the close of the poll, she and the persons at the polling station engaged in an exercise to reconcile the list with Sam’s.

The lawyer then called Jeffers’ attention to the several steps under Rule 39 — that she count the spoilt ballot papers and place them in a special envelope.

She was then to record and count the number of votes given to each candidate on the tally sheet.

“That’s the procedure. So when you speak here that you wanted to make sure that everyone agreed on the number of persons who voted, before we left, what exactly do you mean there, because you hadn’t gone down and done all these things. Had you?”

Jeffers said: “All that you are making mention of here, it was done, but maybe not in the order that it is there.”

She said that reconciling the list made sense because there would have been a query if Sam had a number different from the other persons involved in the process.

She said they started the exercise of reconciling Sam’s list “a little after five” and it took “two hours or so”, ending after 7 p.m.

She said that by the time the reconciliation of the list of persons who had voted and all the steps under Rule 39 were completed, it  “could be a little bit after 11 or before 11, in terms of everything that was done”.

John told Jeffers that he takes it that at the end of the count, she prepared the form 16 – the statement of poll, which records the number of ballots received by the polling station, the numbers used by voters, and the results of the poll, in addition to other information.

She said she prepared the Form 16 when they were “finished counting the ballots and dealt with the ballot box”.

This was “about after nine, around there”.

The lawyer said, “Let’s get that into perspective.

Jeffers said it was sometime after 9 p.m.

“I cannot recall exactly at this time.”

“So between the time when you completed the count and prepared the ballot boxes and minutes to 11, what were you doing?”

Jeffers said: “We were ensuring that all the envelopes were prepared. I proceeded to have the agents, along with the poll clerks, witness the unused ballots to go through to ensure that we had the same, the correct number. We did the envelopes, we completed the forms and all of that was done.”

After a pause, she added: “And that was done in the presence of all who was there.”

John, however, told the witness he gathered her to be saying that she prepared “the ballot boxes” and all that by 10 p.m.

He asked her what preparing “the ballot boxes” by 10 mean?

Jeffers, however, said that she only had one ballot box.

“What preparing the ballot box by 10 meant? What you mean when you say that.”

“After the first process that we had already spoken about, I proceeded to count the ballots. I took the ballot box and I emptied it on a table where everyone was present, Miss Sam, Miss Homer, two police officers were there. I showed everybody the box, everybody had a look that it was an empty box, which I put aside and I proceeded to count the vote.”

John told Jeffers that she said she completed that exercise by 10 or around there.

“I said after 9 and you asked me if it about 10 and I said it could be close to that,” Jeffers said

“So you finished that exercise after 9?” John asked Jeffers twice and she answered yes.

But when he elaborated on the question and asked whether it was closer to nine or 10, Jeffers repeatedly said she couldn’t recall.

Jeffers told the court that the time she left the polling station on election night “could be minutes to or a little after 11”.

Asked what time she handed it to him, she said, “I cannot recall exactly at this time.”

On election night, some results from Central Leeward were announced nationally in the hours immediately after the poll closed.

However, there was an hours-long pause and the pending figures from that district were announced in quick succession with the result then on 7-7.

The main opposition New Democratic Party is challenging the results in Central Leeward and North Windward, two of the eight seats announced as won by the Unity Labour Party for a fourth consecutive term in office.

A ruling in the case is slated for March 21.