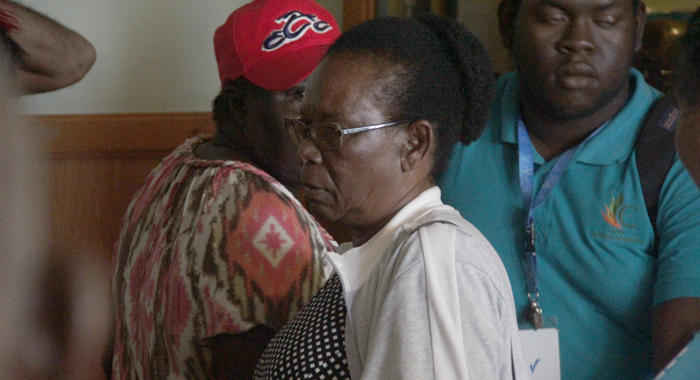 Esla Sam leaves the court after being cross examined on Wednsday. (iWN photo)

An agent for the main opposition New Democratic Party in Central Leeward in the 2015 general elections skipped over more than 60 numbers and repeated 10 others on a list on which she was keeping track of the number of persons who had voted.

Esla Sam, a retiree, of Barrouallie, was the agent for Benjamin “Ben” Exeter, the NDP’s Central Leeward candidate, at polling station CLA 1, located at the Barrouallie Resource Centre.

Exeter has filed a petition challenging the announced victory of Sir Louis Straker of the ruling Unity Labour Party as the winner in that constituency.

Sam was crossed examined on Wednesday as the trial moved into the third day at the NIS Conference Room in Kingstown.

In response to a question from Senior Counsel Douglas Mendes, the lead lawyer for the government in the case, Sam told the court that she did not have any problem with her list at the end of the count.

Mendes asked Sam if her evidence was that, at the end of day, she raised an issue because her record of the number of the persons who had voted did not coincide with that of the presiding officer.

Sam, however, told the court that she did not have any problem with her list and had no disagreement with them about the number of persons who had voted.

“And I did not know what their registration list was saying,’ the witness told the court.

Sam said that she wrote on her voters’ registration list the number of persons who had voted.

She did so she could look at the highest number to be able to tell the number of persons who had voted.

Mendes said that the highest number he sees on Sam’s list is 350, which was written near the name Kathleen Jeffers — the presiding officer.

“Is that the highest number?” Mendes asked.

“That is the highest number I put,” Sam responded.

She further told the court that she couldn’t recall repeating numbers on the list.

However, Mendes said he had checked and there were 10 instances when numbers were repeated.

Asked if she accepts that she missed all those numbers, Sam said that she had someone who worked with her when she took a break to go to the washroom.

“And I don’t think I missed all those numbers,” the witness said.

The lawyer asked if it was Shanice Francis who had stepped in for her and pointed out that Francis had said in her witness statement that she wrote from 204 to 218 and those numbers are on the list.

Sam further agreed that she, not Francis, was keeping a tally towards the end of the vote.

Mendes put it to Sam that it was because her numbers were off that there was a disagreement with the presiding officer, Kathleen Jeffers, resulting in Jeffers going through a detailed recount of the ballots and counterfoil.

“I don’t think that was the reason because she didn’t know what I had on my list. I did not tell her anything,” Sam told the court.

“I had no discussion with she,” the witness said.

Mendes told Sam that Jeffers said that just after 5 p.m., Sam raised a question about the number of persons who had voted and said that she (Sam) would sort it out when she gets home.

The lawyer further told Sam that Jeffers had said she told Sam that she wanted it to be resolved then and there and that is why they went through the long process of recounting the ballots and counterfoil.

“I did not,” Sam said, adding that she does not agree with Jeffers’ statement about the reason for recounting the counterfoils.

Sam said she had a notebook on the day in which she was making notes.

She said she no longer had the notebook and it was in the possession of Maia Eustace, instructing solicitor and a witness in the case.

“Well, they said that it is missing. What I say is that the record she had put before the court says that you report it missing,” Mendes said.

Sam said she did not report the notebook missing.

She said she handed it over to Exeter’s sister and saw it again at Eustace’s office “a very long time ago”.

“I can’t remember the month or the day,” Sam said.

She told the court that she has not seen the notebook since she saw it at Eustace’s office.

Sam told the court that before leaving the polling station that day, all of the agents and the presiding officer were in agreement on how many ballots were counted.

She, however, said that they did not discuss how many persons had voted.

Sam said the count was done twice and they arrived finally 174 for Straker and 169 for Exeter.

She said she got those numbers from her tally sheet, but Mendes said the court has not been provided with that document.

Asked where she had gotten those figures from, Sam said they were counted from the ballot box.